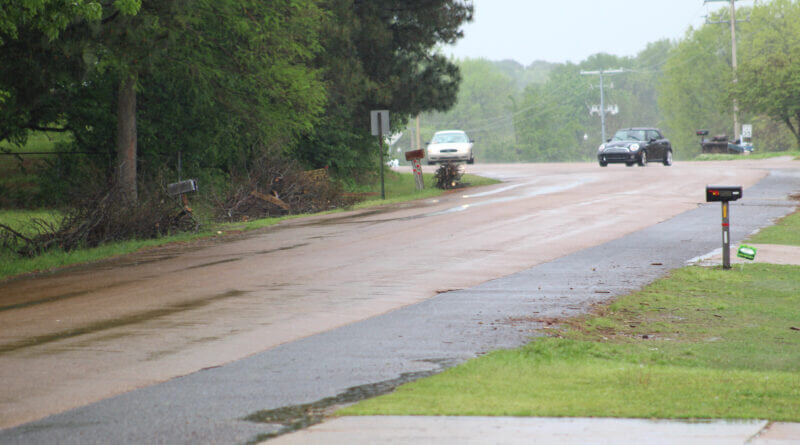 Photo: A secrion of Tulane Road near Nail Road in Horn Lake, which will be part of the city’s initial phase of striping eight streets. (Bob Bakken/DeSoto County News)

You’ll have a better idea of where the lanes are on some streets in Horn Lake where striping has not been drawn, or has faded, after action by the Board of Aldermen this past week.

In a special called meeting on Thursday, April 8, aldermen voted to spend up to $50,000 to stripe two of eight streets determined to be most in need of striping. It is the start of what will be an ongoing project to stripe eight streets in the city.

City Engineer Vince Malavasi presented the board a list of eight streets determined to need attention. The streets listed would cost a total of $166,351.49.

Malavasi reminded aldermen that to do the entire list at one time would mean it would have to go out for bids, a lengthier process than simply asking for quotes.

“Anything over $50,000 has to go out for advertising,” Malavasi said. “The city has the option to select the streets they want to get started on or do the entire street section that we have listed here.”

During the discussion, City Attorney Billy Campbell advised that there is a process the city could be involved in that would avoid needing to ask for bids and get it all done over a period of time.

Alderman John Jones asked the city to go through the process of getting quotes under the $50,000 limit on two streets, and then repeat the process to work through all eight streets.

The other aldermen agreed on what became a 4-0 vote to approve. Three aldermen were not attending the Thursday session. The three not able to attend were Aldermen Donnie “Chigger” White, Charlie Roberts, and LaShonda Johnson. The four attending made for a quorum to allow action to be taken.

The two streets first determined to need attention were: Tulane Road between Nail and Austin roads, and Church Road West, from Horn Lake Road to the railroad tracks.

Aldermen heard a brief presentation from Darlene Cunningham of the Healing Hearts Child Advocacy Center, thanking the board for the city’s support of the center and allowing a pinwheel garden to be placed in front of City Hall as a reminder of April being Child Abuse Prevention Month.

One is for the Alderman at Large on the Republican side between Danny Klein and Chad Engleke. The other primary run-off needed is between current Ward 4 Alderman Charlie Roberts and challenger Dave Young for the Republican spot on the general election ballot.

The Ward 4 race was assured with only nine votes between the two candidates, Roberts and Young. Roberts received 64 votes and Young had 55 votes. George Dixon was third with 20 votes in Ward 4.

The winner of the run-off will advance to the June general election to meet Democrat Lisa Hall-Hayes, who was unopposed in the primary.

There was a question on primary election night about the Alderman at Large Republican race. Klein outpolled Engleke 525-326 with Regina Morris finishing third with 202 votes.

However, had Klein gained two more votes when the election was certified, there would not be a need for a run-off, since the difference would have put Klein over the 50-percent plus one vote majority threshold.

Instead, Klein and Engelke will be involved in the run-off with the winner to face Democrat William Egner in the June general election. Egner defeated Francis J. Miller 264-235 on primary election night.