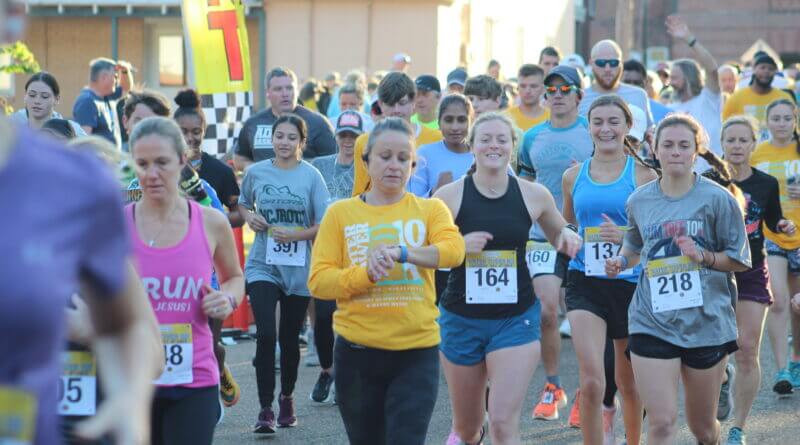 Hundreds were running, sprinting, jogging, and even walking the streets of Hernando Saturday morning for the 13th annual Hernando Water Tower 10K race. The annual race provides the city a chance to show itself off at a tourism driver for those who come in to take part.  Between the run itself and the post-race activities it becomes a fun event. Post-race festivities featured live music by regional musicians along with food and beverages provided by local vendors.

More importantly, the city organizers use the proceeds from the race to fund its participation in the Hernando Excel By 5 Dolly Parton Imagination Library, where Hernando children under age five may qualify to receive free books until they reach age five.  About 500 Hernando children are involved in the program that costs about $12,000 a year.

Race results from Saturday’s run have been posted online and when the final participant had crossed the finish line, it was Senatobia runner Austin Winstead who was the first across in a chip time of 38:17. The 17-year-old Winstead was also the top male runner, ahead of 39-year-old Ryan Goodwin of Olive Branch, who came in with a time of 39:50.

Mason Murr of Earlysville, Virginia was the third overall and third male runner overall with a chip time of 39:56.

Nicole Pell of Olive Branch was the leading female runner across the line Saturday with a time of 44:37. Pell was the 20th runner overall to finish the 10-kilometer, 6.21 mile course.  The second female was Jordan Simpson of Hernando at 46:06 and Belden runner Hannah Sanders took third in a time of 46:17.

A total of 357 runners are listed on the race results for the Hernando Water Tower 10K. Including ”spirit runners,” those who participated but did not run, the total number of participants reached 518.

More on Hernando’s participation in the Dolly Parton Imagination Library is found on the City of Hernando website.