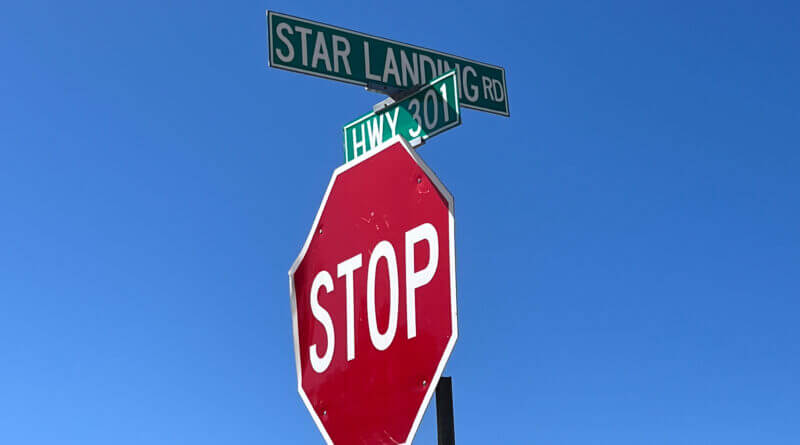 Photo: Many consider this intersection at Star Landing Road and state Highway 301 to be dangerous because of accidents that have occurred there. The Safe Streets Survey is meant to identify dangerous street segments to aid in getting grants for road and street improvements in DeSoto County and the Mid-South. (Bob Bakken/desotocountynews.com)

You’ve no doubt muttered under your breath (or out loud) about being in a traffic jam because of an accident on the interstate, watching a growing number of vehicles travel U.S. Highway 51 along with the growth of distribution centers, or notice how some areas have more crashes than others.

DeSoto County officials want you to voice your concerns and issues about the safety of our streets as part of a Memphis Metropolitan Planning Organization (MPO) “Safe Streets Survey” that has been put out on the internet.

While the survey is an effort to put together an MPO Mid-South Safety Action Plan for the entire Mid-South area, Supervisor Lee Caldwell said it is important for DeSoto County residents to be actively involved in it.

“We want our citizens to take this survey and submit areas that they think may be dangerous or they think need improvement, areas they think may have unsafe intersections or to improve signage or lighting,” Caldwell said. “It’s really important that our citizens participate in helping to develop that plan for the Mid-South area, but specifically for DeSoto County, both unincorporated and the cities.”

The survey will ask for responses about what priorities you may have, from signage improvement and bicycle/pedestrian infrastructure improvement, to increased traffic enforcement, safety education, and other items.

It will ask to identify unsafe intersections, where lighting issues exist, where vehicles are traveling at higher than posted speeds, and other road design issues.

Respondents will also be able to write about other roadway safety concerns or suggestions they may have. It should only take a couple of minutes to complete.

Input will help improve road safety, with the goal to prevent crashes causing deaths and serious injuries in the Mid-South. Caldwell said the data received will also help in grant applications.

“When we apply for grants, they will ask for a safe roads plan,” Caldwell said. “Our citizens know their areas better than anyone.”

“Along (U.S.) Highway 51, it’s great that we have all this business and industry, but with that, we have the need to mobilize our traffic and move the flow of traffic,” Caldwell said. “We’re going to have to widen certain arteries to do that.”

Officials hope residents respond to the survey in the next couple of weeks, at least by Nov. 1, so data can be collected and plans may begin to be formalized in the MPO areas on how to move forward.

Following is the link to the Safe Streets Survey.