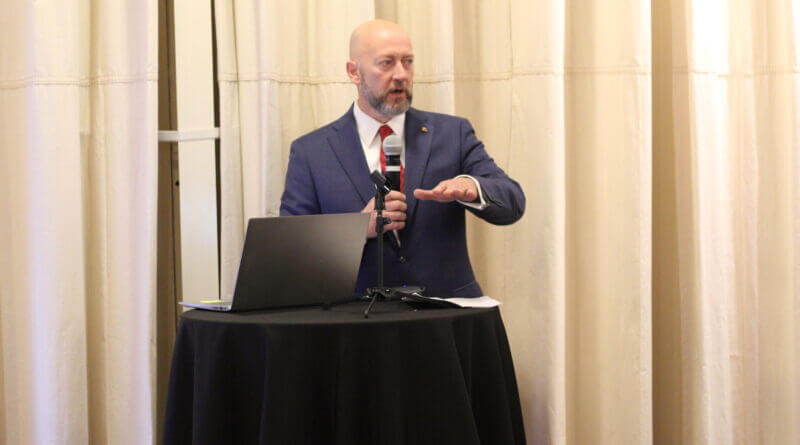 City has earmarked $4.6 million for street resurfacing during the next year

Hernando Mayor Chip Johnson gave an update on things happening in the city during Tuesday’s Hernando Main Street Chamber of Commerce annual awards luncheon, which DeSoto County News attended and covered. The gathering at 1 Memphis Street also featured the presentation of awards from the Chamber. Pictures and information about the awards are found on the DeSoto County News Facebook page.

Johnson said the city expects to spend $4.6 million in paving streets during the next year, a figure Johnson proudly described as a huge amount of money for street surface maintenance.

“We got a $2.2 million MMPO (Memphis Metropolitan Planning Organization) grant to pave McIngvale Road from I-269 north to Pleasant Hill,” Johnson said. “The Board (of Aldermen) is going to match that with $507,000. That will address a road that is falling apart now back together in time for the school to open.”

Johnson was also asked about the visit to Jackson he and other local leaders recently took to plead DeSoto County’s case for more road dollars. Widening I-55 from Southaven to Hernando is estimated to cost about $300 million. Construction would include expanding to 10 lanes from Goodman Road to Church Road in Southaven with a new interchange at Church Road, then an eight-lane interstate from Church Road to I-69 with a new Starlanding Road interchange and a revamped Nesbit interchange, followed by a six-lane interstate south of I-69 to the Commerce Street exit in Hernando.

“We are speaking with one voice and asking the state to please spend $300 million in DeSoto County,” Johnson said about the united front local and county leaders have presented. “I think we are getting some traction and getting good feedback. We elected officials can ask all we want to but you business owners are the ones who really carry the weight on this.”

Johnson asked attendees to sign the petition on DrivingDeSoto.org.

The mayor added, separate from that issue, Hernando leaders and state Sen. Michael McLendon (R-Hernando) have been working with MDOT officials to turn the Commerce Street exit plan into its own project, not tied to I-55 widening.

“We want it to be a stand-alone project that can be done separately and quicker,” Johnson pointed out. “We’re working that angle, too, so we make sure we get our exit.”

Other things Johnson mentioned during his talk are that the police department will be adding seven new officers and the city is working to acquire a third ambulance for first responders. There were 13 new commercial building permits issued in the past year and 192 new home permits issued. A food truck ordinance is being put together for the city and a public hearing on that is scheduled for the Dec. 20 board meeting. Sales tax revenue grew by eight percent during the past year and has already grown 13 percent for the first two months of the current fiscal year.

The mayor also revealed that the popular fast-food burger chain Whataburger, which this year added its first two DeSoto County locations in Southaven, has targeted Hernando for its next restaurant location in the county.