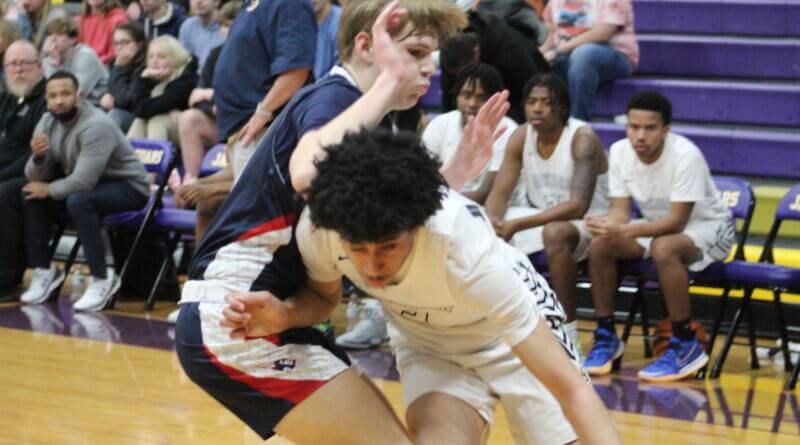 In the semifinal contests played at DeSoto Central, the Lady Quistors beat the Lady Patriots 78-33 and that was followed by the Conquistadors outrunning the Patriots 83-58.

In the girls’ contest, Olive Branch held Lewisburg without a point until the final minute of the quarter as the Lady Quistors took a 15-7 lead.

Rhema Pegues and the Lady Quistors broke it open in the second quarter to take a 34-17 halftime lead. Pegues led Olive Branch with nine points in the half, while Allie Carroll paced the Lady Patriots with seven.

Olive Branch continued the push in the third quarter to a 59-28 lead and held Lewisburg to five points in the fourth quarter.

Pegues was the catalyst for the breakaway in the third quarter, hitting for 14 points, all from the field, and with two three-pointers in the eight minutes after halftime. The third quarter was also when Hodges picked up the slack, as Carroll was shut down. Hodges scored nine of the Lady Patriots’ 11 points in the period.

For the night, Pegues scored 26 points and was followed by Lamonnie Owens with 16 and Addison Howell scored 14 more. Hodges finished with 12 points and Carroll with seven.

Lewisburg now takes on Center Hill in the third place game Thursday night at 6 p.m. with a berth in the state playoffs on the line for the winner. Olive Branch plays DeSoto Central Friday at 6 p.m. for the region championship and a number one seed in the playoffs, although both teams will advance.

In the boys’ contest Tuesday night, Olive Branch broke out to a 20-9 first-quarter lead and extended the margin to 43-21 at halftime. The Quistors’ hot shooting continued after intermission, but Lewisburg did rally to get within nine points on two occasions before Olive Branch grabbed a 59-47 advantage going into the final eight minutes of play. Lewisburg was held to 11 points in the fourth quarter as the Quistors controlled the quarter and the rest of the game.

Ten Olive Branch players scored in the first half, led by Landon Jeffries with six. Hayden Drumwright countered with 10 for Lewisburg, which included two three-pointers. Drumwright was then held to only one more from beyond the arc in the second half as he finished with 13 points.

For the night, Terry Joyner and Darren Davis each scored 12 , followed by Jaylyn Tyler with 11 points and Trevor Joyner scored 10 more.

Noah Jorgenson, held scoreless in the first half, finished with 15 to lead Lewisburg, followed by Drumwright’s 13. Josiah Nelson added 11 more for the Patriots.

Thursday, the Patriots come back to DeSoto Central to meet the host Jaguars with a playoff spot on the line in the consolation game at 7:30 p.m. Friday, it’s Olive Branch against Center Hill for the region championship and the top seed in the state playoffs, although both teams again advance to next week’s state postseason.

WORTH NOTING: Lake Cormorant scoring leader was Lamar Done with 12.