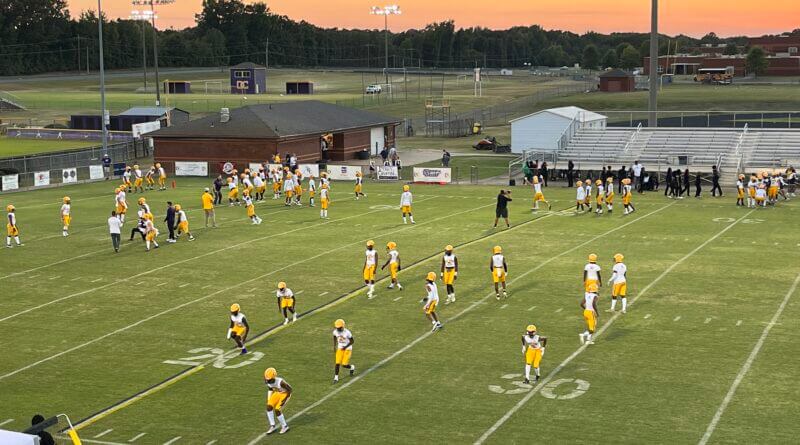 The win was the fifth conquest of the Jaguars by the Conquistadors in the last six meetings and avenged last year’s 28-7 DeSoto Central victory.

Vance got the Quistors quickly on the board, throwing to junior Britten Traylor on a play that went 65 yards for the touchdown with just 54 seconds gone in the ball game.  Vance followed with a short run for another score and a 14-0 Olive Branch advantage.  DeSoto Central got on the scoreboard when running back Cameron Taylor went over to cut the deficit to 14-7 when the first quarter ended.

Olive Branch opened the second quarter with a 30-yard field goal booted by sophomore kicker Austin Taylor for a 17-7 edge but one play later DeSoto Central quarterback Andrew Moore found an opening and green grass heading toward a 68-yard touchdown and the Jaguars again getting within three at 17-14 Olive Branch.

That’s when Vance got back into the action, finding Traylor again on a 46-yard pass play to regain a 10-point Quistor lead.

The back-and-forth scoring action continued in an entertaining second quarter, as Moore connected with receiver Destin Wheeler, who scored on a 51-yard pass play, again getting the Jaguars back within three points at 24-21 at halftime.

Defenses for both teams went to work in the third quarter as, after a flood of points in the first half, there was no scoring in the opening 12 minutes of the second half.

However, Vance sealed the deal for Olive Branch with two scores in the fourth quarter; one a three-yard run to complete a drive, and then after an interception of a Moore pass, Vance went into the end zone again on a 10-yard run to complete the scoring at 37-21 Conquistadors.

For DeSoto Central, Andrew Moore was 18 of 26 for 253 passing yards, one touchdown and one interception. Moore also had eight rushing carries for 117 yards and a touchdown. Parker Odle caught nine passes for 118 yards, while Destin Wheeler caught five passes for 82 yards and a score.

Next week, Olive Branch hosts South Panola at Pool Field, while DeSoto Central looks to rebound against the winless Eagles at Horn Lake.

Elsewhere in DeSoto County football Friday night, it was: