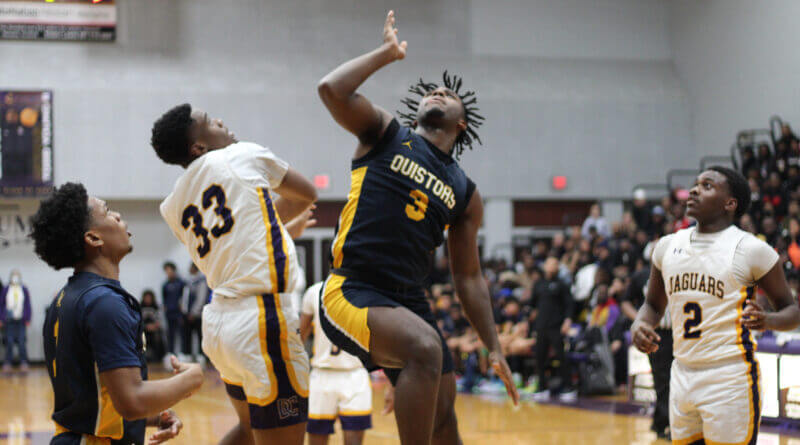 OLIVE BRANCH BOYS 68, DESOTO CENTRAL 62: JayLyn Tyler poured in a game-high 27 points to push the Conquistadors past the Jaguars Friday night at DeSoto Central. The win keeps the Quistors unbeaten in Region 2-6A play at 3-0 and Olive Branch won its fifth straight game.  DeSoto Central dropped to 10-7 overall and 1-2 in region play.

DeSoto Central had several opportunities late in the contest to pull off the upset, especially with Bob Dickson Jr. getting 19 points and Caleb Curtis adding 15 more for the Jaguars.

Olive Branch held a 10-9 lead after one quarter but DeSoto Central came back in the second quarter for a 32-27 lead at halftime. Tyler scored nine points for the Quistors in the second period, while the Jaguars were led by Curtis with a trio of three-pointers for nine points.

The difference came in the third quarter, when Olive Branch erupted for 25 points in the quarter for a 52-47 lead heading into the final period of play.

Dickson got eight of his points in the third period for DeSoto Central, while Olive Branch got 10 from Tyler, who added five more in the final quarter of play. Among his 27 points, Tyler made four from beyond the arc for a total of 12 points.

DESOTO CENTRAL GIRLS 46, OLIVE BRANCH 36: The Lady Jags turned aside their Olive Branch rivals to open the evening, thanks for Thailan Payne’s 16 point effort in the victory.

Olive Branch opened the game with a 7-6 first quarter lead, but DeSoto Central rallied for a 17-16 lead at halftime.

The Lady Jags broke the game in the third quarter, outscoring the Lady Quistors 19-12 in the quarter for a 36-28 lead heading in the final period of play.

Payne scored six points in the first half, but scored six in the third quarter and four more in the final quarter to lead DeSoto Central, now 10-5 for the season and 1-2 in Region 2-6A. Olive Branch fell to 4-7 overall and 1-2 in region action.

Brianna Black paced the Lady Quistors with 14 points, with eight of the total coming in the first half.