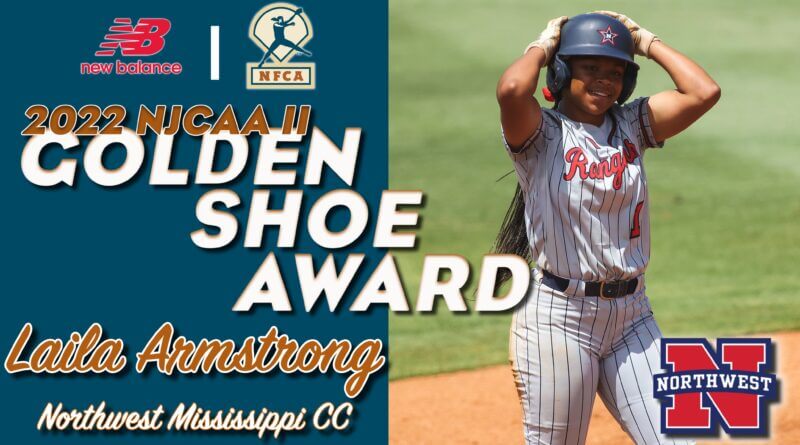 After breaking the program’s single-season and career stolen base records this season, Northwest sophomore speedster Laila Armstrong can add another honor to her collection.

Armstrong has been chosen as this year’s NJCAA Division II recipient of the New Balance-NFCA Golden Shoe Award, the National Fastpitch Coaches Association (NFCA) announced on Friday afternoon. The award is given to the nation’s best base stealer from an NFCA member institution.

After collecting just 15 stolen bases last season, Armstrong totaled a team-best and conference-leading 47 stolen bases on 49 attempts in 2022, only being thrown out twice on the season. She also recorded 10 multi-steal contests, including a season-best three against East Mississippi and Coahoma. Armstrong ranked fifth in the nation and broke the single-season record midway through the season, capping off her career 62-of-65 in stolen bases and surpassing the program’s previous career record of 51 set by Kailey Walker (2016-17).

Since the award’s creation in 2005, Armstrong is the first MACCC student-athlete to receive the honor. Additionally, Northwest coach Chelsea Bramlett was a two-time recipient of the NCAA Division I version of the award in 2009 and 2010, while finishing up her career at Mississippi State.

For as flashy as she was on the bases, Armstrong was a threat at the plate as well. The Olive Branch native and Center Hill alumnus posted a .406 batting average, the second highest on the team, while also totaling nine doubles, four triples and 28 runs batted in. She started in center field for most of the season, finishing with 68 putouts and a .986 fielding percentage.

Armstrong’s efforts helped guide Northwest to a 39-15 overall record in 2022, the best season in program history. The Rangers won their first-ever Region 23 title and finished as one of the final four teams remaining in the NJCAA Division II Softball Championship.