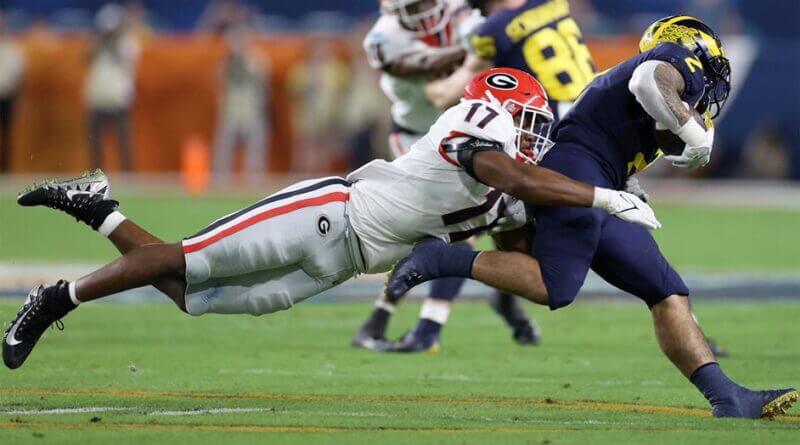 Georgia’s Nakobe Dean has been selected as the 2022 Arthur Ashe Jr. Male Sports Scholar following a nationwide selection process out of nearly 1,000 nominees by Diverse: Issues in Higher Education.

In addition to their athletic ability, Dean and Jaques are students of color who have maintained a cumulative grade-point average of at least 3.5, are at least sophomores academically and have been active on their campuses or in their communities.  Of the nearly 1,000 scholar-athletes nominated, one male and one female athlete are annually selected as Sports Scholar of the Year.

Dean enjoyed a standout season on the field, earning the Butkus Award as the nation’s top linebacker while leading the Bulldogs to the 2021 national championship.  A consensus All-America selection, Dean recorded 72 tackles, including a team-high 10.5 tackles for loss.  He also had 6.0 sacks, six pass break ups, 31 quarterback pressures and two interceptions, including a 50-yard “pick six” against Florida.  Dean is a mechanical engineering major who sports at 3.53 GPA and was named to the CoSIDA Academic All-District team.  The 2021 permanent captain earned the team’s Scholar-Athlete Award, which is given to the student-athlete who had the highest GPA at the conclusion of the last academic year, as well as the Academic Achievement Award, which is given to those who have exhibited intense focus and/or displayed a marked improvement in the classroom over the past academic year.

Within the community, Dean was named the overall captain of the 2021 American Football Coaches Association’s (AFCA) Good Works Team.  He took a leading role with “Dawgs for Pups,” which is the Georgia football program’s multi-faceted effort to directly affect the lives of local youth in the Athens/Clarke County area; visited Camp Sunshine, which provides recreational, educational and support programs for children with cancer and their families; participated in Bulldogs Battling Breast Cancer Golf Tournament, which is designed to raise awareness and money for research for a cure to breast cancer; helped with Read Across America, which is a program for local school children as part of the national program where civic groups and community leaders volunteer their time to read a story to students at Barrow Elementary.

On April 28, 2022, Diverse: Issues In Higher Education will publish its annual Arthur Ashe Jr. Sports Scholarsspecial report edition.  As the name denotes, this edition is a part of our decades-long tradition of recognizing outstanding minority young men and women who have distinguished themselves in their academic and athletic pursuits.

Georgia student-athletes have now been recognized as the overall Arthur Ashe National Sports Scholar honoree four times.  Blankenship was chosen in 2020, basketball guard Haley Clark was selected in 2018 and gymnast Marcia Newby was tabbed in 2010.  Additional past Ashe scholars include Baylor’s Robert Griffin III in 2011, Tennessee’s Kara Lawson in 2003; San Diego State’s Marshall Faulk in 1993 and Stanford’s Simone Manuel in 2017.  Published since 1984, Diverse: Issues In Higher Education is the nation’s only biweekly newsmagazine dedicated exclusively to diversity issues in higher education.