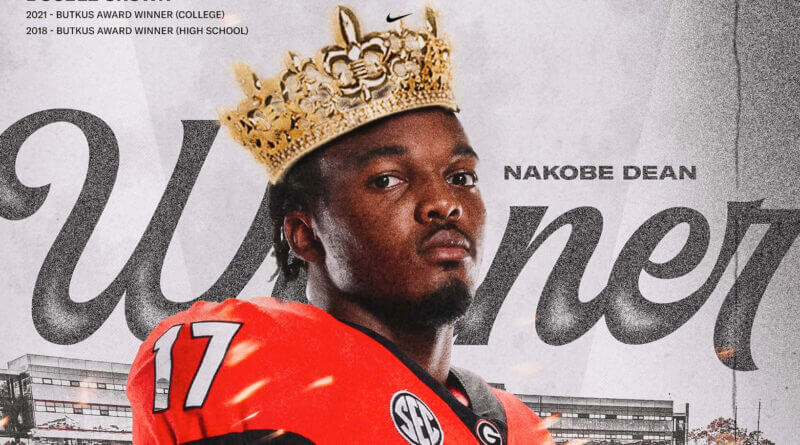 For the second time, Horn Lake’s Nakobe Dean has been named a Dick Butkus Award winner.

Sunday, the Butkus Award, named for legendary Chicago Bears linebacker Dick Butkus and represents the top linebacker in the country, named the University of Georgia junior as its Collegiate Award winner for the 2021 season.

Dean also won the award as a high school senior at Horn Lake, helping the Eagles to an unbeaten season and a 2018 MHSAA 6A state championship.

Dick Butkus and his son Matt made the presentation to Dean during a team meeting Sunday at the University of Georgia. Nakobe becomes the second Bulldog to be named to the prestigious honor.

The 6-0, 225 lb. junior mechanical engineering major from Horn Lake started all 12 regular season games for the Bulldogs. His regular-season performance included 56 total tackles, 7.5 tackles for loss, five sacks and two interceptions, including one for a touchdown. He has played in 37 games during his Georgia career.

“Nakobe Dean is a playmaker with a special combination of strength, coverage ability, playmaking flair and leadership skill,” said the selection committee in a news release. “He consistently makes his presence felt on the field and in the community, elevates the defense with his command and is a complete linebacker who has made a tremendous impact on Georgia’s program.”

Finishing second was Devin Lloyd of Utah with 30 percent of the weighted vote. Others receiving votes; Leo Chenal of Wisconsin (15 percent), Damone Clark of LSU (7 percent), Darrian Beavers of Cincinnati (7 percent), Chad Muma of Wyoming (7 percent), and DeMarvion Overshown of Texas with a write-in vote.

Dean joins Jaylon Smith and Manti Te’o as the only players to win both the national high school and collegiate trophy.