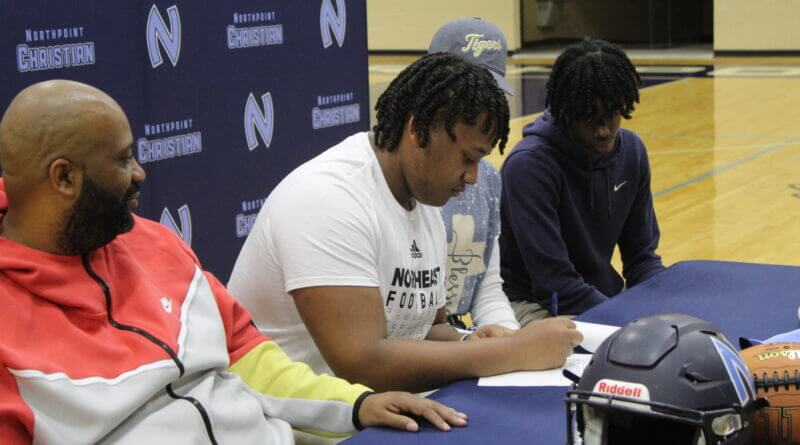 Gilliland’s commitment to Northeast on National Signing Day, Wednesday, Feb. 2, was one of a number of college football signings in DeSoto County.

Playing both sides of the football, both offensively and defensively for the Trojans, Gilliland is expected to be on the defensive side of the line for the Tigers.

“He’s played everything, except for kick returns,” said Northpoint coach Tyler Gold. “Chris is one of the best offensive and defensive linemen I have ever been around. He’s done everything with a great attitude and an awesome effort.”

An all-metro pick who in the classroom carries a 4.0 grade point average, Gilliland said Northeast can help him get to the goals he has for the future.

“The coaches were really interested in me,” Gilliland said. “I can get a good education over there, my dream is to play Division I football and they said they could prepare me to get to that level.”

Gilliland, who also plays on the Trojans’ basketball team and at one time thought of pursuing college basketball, is a leader by example, said Gold.

“Chris doesn’t talk a lot, but when he does talk, on the field or in the weight room, everybody drops and they listen,” Gold said. “While he’s a man of few words, what he says means a lot.”

“Wherever they go, they will always be part of the Olive Branch football family,” said coach Jason Russell. “The road ahead is difficult and will require your best every single day. This group will accomplish this if you set your mind to it.”

Another school that had a ceremony for football signings on National Signing Day was at Horn Lake, where six Eagles signed letters of intent.

ALSO SIGNING… Other signings at the community college level included Telvin Amos of Lake Cormorant, who signed with Mississippi Gulf Coast, and Troy Sims of DeSoto Central to Itawamba.