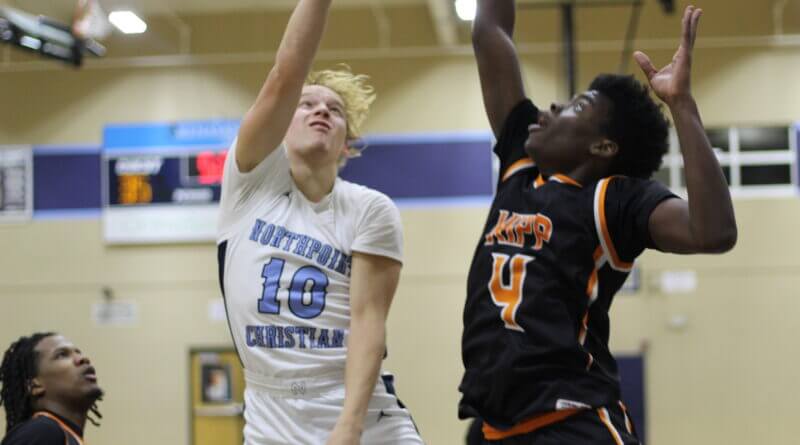 Christian Gilliland’s 31 points were not enough for Northpoint Christian in the Trojans 59-49 loss to KIPP Collegiate Monday night on David Manley Court.

The high-scoring guard was the only Northpoint player in double figures as the Trojans, down by as much as 17 points at one time, were able to close the gap late, but too late.

The Trojans held a one-point lead after one quarter at 15-14, but the Phoenix were able to hold Northpoint to just four points in the second quarter to take a 29-19 halftime lead.

KIPP took a 41-30 lead after three quarters and then pulled away in the final eight minutes before Northpoint made its late comeback.

Gilliland, Northpoint’s only player in double figures, scored eight points in the first quarter and had 12 total points at intermission. Fourteen of his total came in the final period of play.

After Gilliland, Josh Miles scored six points for the Trojans.  Jordan Patterson paced the Phoenix with 22 points, followed by Delrico Grady with 12.

The Northpoint Christian girls’ basketball team ran away from KIPP Collegiate in a game where the second half clock did not stop due to the 30-point clock rule.

The Lady Trojans took a 17-2 lead after eight minutes of a quarter that saw the Phoenix net their only points of the quarter in the last minute before the quarter break. That lead became 40-5 Northpoint at halftime, initiating the continuous clock rule for the second half.  A 9-0 third quarter grew the lead to 49-13 Lady Trojans and with reserves on the floor for the final quarter, only three points were scored, all from Northpoint.

Lillie Milligan led the Lady Trojans in scoring with 15 points, 11 of which came in the first half. Nailah Herrera followed with 10 points, eight of which were scored before the first-half break.  Ten of KIPP Collegiate’s 13 points were scored by Smith.