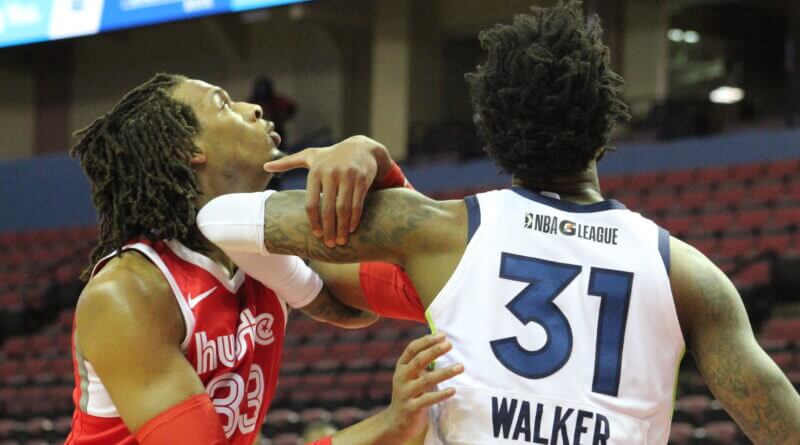 Late run for Memphis means a win over the Wolves

A five-game losing streak was stopped Wednesday night when the Memphis Hustle defeated the Iowa Wolves 111-103 in NBA G League aciton at the Landers Center in Southaven.

An assignment player from the Memphis Grizzlies, Santi Aldama joined the Hustle roster a couple of days ago and in his first game appearance knocked down a career-high 28 points, adding nine rebounds, six assists, four steals and three blocks to lead the team to the win.

“I just wanted to play really hard and help the team win,” said Aldama, a 6-11 rookie from Loyola (Maryland). “It was an intense and long game but we wanted it more.”

Along with Aldama, Shaq Buchanan scored 24 points and Tyrell Terry finished with a double-double, scoring 11 points and adding 11 assists in the Hustle’s third win (3-7) of the NBA G League regular season.

“He did everything within the system, which I was very proud of,” said Hustle coach Jason March about Aldama. “He came in and played the right way, what a huge help for us, for sure.”

Cameron Young also got into double digits for the Hustle against the Wolves (6-4) with 16 points and five rebounds.

Memphis scored the last eight points of the game in the final 88 seconds for the win, tied at 103-103 with 1:28 remaining. Buchanan sparked the streak with a three-point play, part of his 10-point effort in the final 7:50 of the contest.

The Wolves led by eight after one quarter at 32-24, but the Hustle was able to get within two at 60-58 at halftime.

Defense stepped up for the Hustle in the second half, allowing Iowa to score 22 third-quarter points and 21 in the fourth quarter.

“Defensively, we had a heck of a (fourth) quarter,” March said. “We knew that our defense would have to give us a spark, to let our defense help our offense, basically. We did a much better job of completing the stop and finishing the stop in the second half.”

Iowa was led by Brian Bowen II with 26 points and McKinley Wright IV with 22 in the loss.

The eight-point victory margin was the largest of the night for Memphis, which at one time trailed Iowa by 15 points in the second quarter.

Once again, however, the Hustle were hurt by the injury bug, as Yves Pons and Freddie Gillespie were both hurt during the game. A starter, Pons was held to just 14:23 of playing time and Gillespie, who came off the bench, logged just under 20 minutes before his injury in the second half. There was no immediate word about the extent to either player.

The Hustle will complete their four-game home stand Friday night against the Birmingham Squadron, then will travel to the Texas Legends and to Birmingham, before returning home for the Renasant Bank Financial Literacy Game for kids on Thursday, Feb. 10, starting at 10:30 a.m. in the Landers Center.