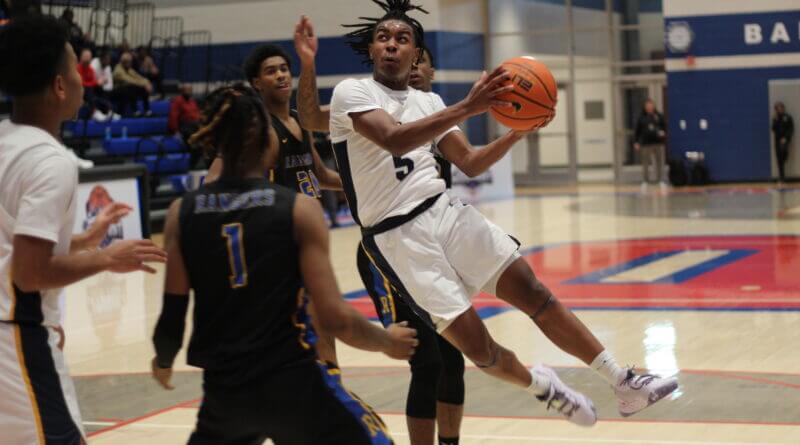 Photo: Caleb Hunt of Olive Branch flies in for a layup against Raymond Monday in the Quistors’ 74-70 victory over Raymond. (Bob Bakken/desotocountynews.com)

The Conquistadors found themselves down 43-25 at the break, at one point fell behind by as many as 20 points and had been outplayed for the first 16 minutes of the game.

“We weren’t a lot of the things we normally do,” said Olive Branch coach Eric Rombaugh. “There really wasn’t much of an adjustment that we had to make. We just had to start playing Olive Branch basketball. We’re trying to outscore people and that’s not going to win many games.”

The matchup featured two of the top three boys’ basketball teams from last year, Raymond of Class 4A ranked number one overall by Scorebook Live and Olive Branch was third overall.

“Raymond is one of those teams that year-in and year-out are always good,” Rombaugh said. “We knew this was going to be a chance to measure ourselves and see where we are.”

However, the Quistors’ ship was righted when the teams came out of the locker room for the second half. Olive Branch went on a strong run of points to start the third quarter and kept it going, finishing with a 74-70 victory over the defending 4A state champs.

Raymond was led by standout Karmarius Lewis who finished with 29 points, 26 of which were in the first half.

“At halftime he had 26 points and we (as a team) had 25,” Rombaugh said. “He was really our focus to stop him and let somebody else beat. And we did that.”

Olive Branch continues play in the showcase of high school basketball talent Tuesday night at 6 p.m. against Tupelo, a game that’ll be played at Houston High School in Germantown, Tenn.

SPORTS ETC.: Toronto defeated Winnipeg 24-23 Sunday to win the Canadian Football League’s Grey Cup Championship played in Regina, Saskatchewan. The Argonauts won the title with the help of former Olive Branch Conquistador and fourth-year CFL linebacker Wynton McManis. The former Memphis Tiger came to Toronto as a free agent from Calgary, where he played three seasons.  McManis has also made brief appearances with San Francisco and Miami in the NFL.