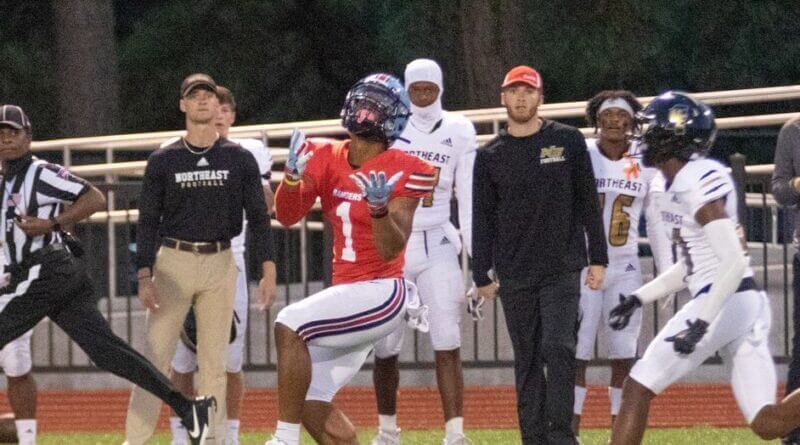 Although things got off to a rocky start for Northwest in Thursday’s battle against Itawamba, the fourth-ranked Rangers scored seven unanswered touchdowns and posted the team’s most complete performance of the season in a 49-10 victory against the Indians.

Northwest accounted for a season-high 504 yards of total offense and improved to 4-0 on the season, while starting 1-0 against MACCC North Division competition. The win also helped the Rangers move to 43-26-1 all-time against the Indians, who fell to 1-3 overall and 1-1 in division play.

Itawamba started the game with the ball and moved quickly on the opening possession of the game, as Karson Green’s 41-yard pass to Azaria Smith helped the Indians make the game’s first trip to the red zone. ICC was stopped inside the five-yard line and settled for a 21-yard Shane Lasher field goal, earning the early 3-0 lead.

One of the few major blemishes of the evening for Northwest came on the ensuing kickoff return, as the ball was fumbled back to Itawamba, giving the Indians favorable field position. Two plays later, Stephen Hall picked off Green to give the Rangers the ball, but the possession came up empty-handed.

On its next drive, Itawamba embarked 83 yards downfield on eight plays, capping off the possession with a 29-yard touchdown pass from Green to Shamar Sandgren. The score made it a 10-0 advantage for the Indians midway through the first quarter.

With its second offensive possession, Northwest began to turn the tables back in its favor. A nine-play, 49-yard drive for the Rangers ended with a short keeper by quarterback Ren Hefley, cutting the score to 10-7 with 3:25 to go in the first quarter.

Itawamba’s next possession was cut short on the first play from scrimmage, as Green’s pass found the hands of Byron “Tank” Pearson for the Rangers’ second interception. The midfield drive was highlighted by a pair of 20-yard passes from Hefley to D.T. Sheffield, including a 22-yard touchdown reception that helped Northwest take a 14-10 lead.

Although the Rangers’ next offensive drive ended in a missed field goal attempt by Eli Hamlin, it didn’t take long for Northwest to begin pulling away in the second quarter. As the defense continued to frustrate ICC, the Northwest offense began to click. After Hefley connected with E. Jai Mason to make it a 21-10 advantage, the Rangers found the end zone once more in the first half, as a short touchdown from Cayden Betts lifted Northwest to a 28-10 halftime lead.

Starting with the ball to open the second half, Hefley guided the Rangers on a 13-play, 75-yard drive that ended in a 10-yard touchdown pass to Mason. Later in the third quarter, an 11-play, 65-yard possession culminated in the first career score for Xavier Davis, stretching the Northwest lead to 42-10 entering the final 15 minutes.

It was in the fourth quarter where several players made their debuts, including freshman quarterback Kabe Barnett. With nine minutes remaining, the Hattiesburg native worked his way onto the stat sheet, breaking free for a 55-yard run that ended in the Rangers’ final touchdown.

Northwest outgained Itawamba 504-308, with 268 yards coming through the air. Hefley finished 23-of-34 with three touchdowns and no interceptions, while Barnett, Betts and Jamarien Bracey each finished with 50 yards or more on the ground.

Nine different receivers came away with at least one reception for the Rangers, led by Sheffield’s four catches for 87 yards. The Corinth native also had the longest reception for Northwest, a 31-yarder that came on the Rangers’ third touchdown drive early in the second quarter.

Green passed for 169 yards for Itawamba and completed eight of his 19 pass attempts, before leaving the game with an injury in the second quarter. Red Parker took over under center, finishing 4-for-11 and 21 yards, while his 42 rushing yards led the ground attack for the Indians.

Sandgren was possibly the brightest spots for ICC in the loss, logging 119 yards on six catches. Darryen Hobbs’ 11 tackles led the Indians’ defense, followed by nine tackles from Brandon Fairley and seven from Josh Pack.

Next up for Northwest is a road trip to East Mississippi, currently ranked eighth in the nation. The Lions (3-1, 1-0 MACCC) are coming off a come-from-behind win at Mississippi Gulf Coast. Kickoff is scheduled for Thursday, September 29 at 7 P.M. in Scooba.