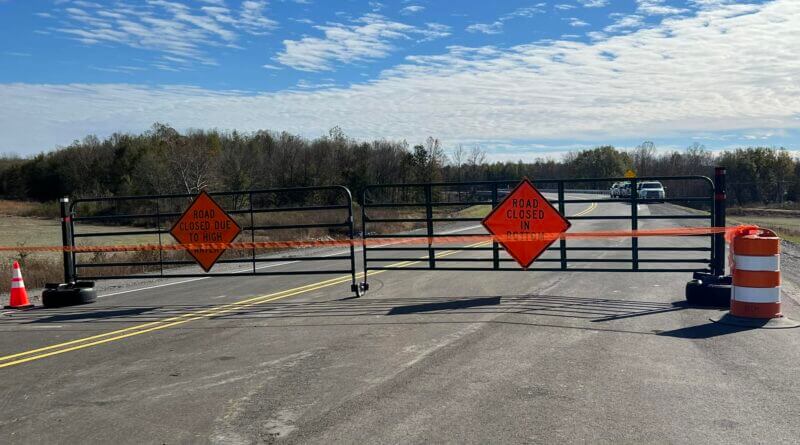 Roadway to open to traffic Tuesday at 10 a.m.

Photo: Gates on Holly Springs Road are about to be opened with Monday’s ribbon cutting and Tuesday’s finishing of the nearly $37 million project to raise the roadway 10 feet, add five bridges, and ease dangerous curves along a new 2.6 mile stretch of roadway that had been prone to flooding. (DeSoto County Government photo)

Officials said Monday it will be Tuesday at 10 a.m. when Holly Springs Road is fully opened to traffic. A main county road through DeSoto County that also affects parts of Tate and Marshall counties can now be fully used, completing a project that was years in the making.

The last delay in the nearly $37 million project was some guard rail, rumble strip and striping work. The roadway could not be opened until the guard rails were completed. Some intermittent lane closures may also take place as other items are completed.

But, county supervisors, officials and dignitaries gathered on the roadway east of Johnston Road Monday morning to celebrate the project’s completion. The road was raised 10 feet as a measure against the constant flooding that occurred after rains fell.

Five new bridges were built, and dangerous curves were straightened as a safety measure.

Monday’s gathering included U.S. Sen. Cindy Hyde-Smith (R-Miss.), who stressed how government bodies cooperate at every level to make the road a reality.

“You guys just do it right, ” Hyde-Smith said about how local governments have come together. “DeSoto County is so easy to represent.”

Hyde-Smith was involved in getting a $13 million U.S. Department of Transportation BUILD Grant for Holly Springs Road ahead of the road’s actual construction.

Supervisor Jessie Medlin reflected on the history of the project at Monday’s ribbon cutting, saying the flooding problems were an issue for years, as far back as he has been on the board.

“In 1992, the road would flood and we would post people out here at night, which I thought was dangerous, to make sure nobody would run through the flooding on the road,” Medlin said.

Phase One of the project started in 2011 and the BUILD grant was awarded in 2018, followed by construction starting in 2020. Medlin noted the importance of the road for DeSoto and adjacent counties.

“This road is a great road for commerce for Tate County, Marshall County and DeSoto County,” said Medlin. “This is just amazing what has happened.”

Caldwell reflected that when he was Transportation Director for the DeSoto County School District, his first call every morning after a rainfall was to the county to learn the condition of Holly Springs Road. He needed the information to determine how to route buses for student pick ups during the school year.