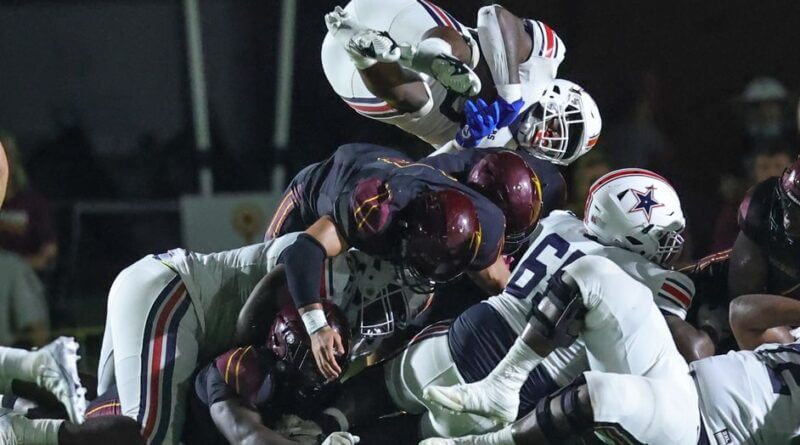 Photo: Northwest tailback Jamarien Bracey goes airborne for the Rangers’ final touchdown of the night. The Bryant, Ark. native rushed for a pair of touchdowns to help Northwest to a 21-14 victory at Pearl River. (Credit: Bobby McDuffie)

For most of the first half, things seemed bleak for No. 4 Northwest in Thursday’s road showdown at 14th-ranked Pearl River.

Trailing 14-7 at the break in front of a raucous Wildcat crowd, the Rangers successfully turned the tables in the second half, keeping Pearl River out of the end zone and completing a 21-14 rally against the much-improved South Division squad.

Pearl River’s opening drive almost ended in failure, thanks to an Omar Pew interception, only for the ball to be fumbled back to the Wildcats on the same play. PRCC held the possession for the first nine minutes of the game, eventually scoring on a short carry from Lawson Pratt to jump ahead 7-0.

After Northwest was unable to get anything going on its opening possession, Pearl River got the ball back and moved it across midfield, only for the drive to stall on a pair of incomplete passes. From there, the Rangers embarked on a 10-play drive that carried over into the second quarter and ended on a 25-yard, game-tying touchdown pass from Ren Hefley to D.T. Sheffield.

Pearl River once again moved the ball well into Rangers’ territory on the next drive, only for the Northwest defense to halt the Wildcats on the 31-yard line. However, PRCC would find the end zone anyway before the halftime break, scoring on a 34-yard pass from Pratt to Chris Holifield and taking the 14-7 lead with less than five minutes to go.

Momentum began to slowly shift in favor of Northwest late in the second quarter, as Hefley threw his first interception to K. Irving. Three plays later, Jaylen Powell snagged an errant pass from Pratt, recording an interception of his own to push Northwest into good field position. Despite being unable to score, the play denied the Wildcats a shot at the end zone and helped the Rangers remain within striking distance as the first half expired.

Northwest opened the second half with the ball and embarked on a promising drive, but a penalty and a sack stopped the momentum near the 30-yard line and forced the Rangers to punt. After Pearl River also came up empty-handed on the ensuing possession, Northwest finally hit paydirt on a seven-play drive that would tie the game.

Cayden Betts got the scoring drive going with three straight carries, but it was Hefley’s 38-yard completion to Dekyren Johnson that helped put Northwest deep in the red zone. Three plays later, Jamarien Bracey tied the game at 14-14 with his three-yard carry at the 5:16 mark of the quarter.

After yet another defensive stop from the Rangers, Northwest set up near midfield and set its sights on a go-ahead touchdown. Carrying over an eight-play drive into the fourth quarter, a 32-yard completion from Hefley to Jaycob Horn paved the way for another short score from Bracey, pushing the Rangers to a 21-14 advantage.

Though Pearl River chewed up the clock on a nearly eight-minute possession, the Wildcats were stopped on a pair of incompletions at the Northwest 42-yard line, resulting in a turnover on downs. When the Rangers got the ball back with 5:52 to go, Bracey took care of the victory, burning the clock with seven carries on the last nine plays.

Northwest edged Pearl River in total yardage, 323-256, with nearly 200 of those yards coming in the passing game. The Rangers also outnumbered the Wildcats on the ground, 131-72, with Bracey accounting for 105 of those yards.

Hefley finished 12-of-15 with 192 yards, a touchdown and an interception. Four receivers finished with 32 yards or more, led by 41 from Sheffield and 39 from Kevin Diaz.

Sam Brumfield and B.J. Washington led the Northwest defense with seven tackles each, while Rontavious “Dude” Person and Jykeon Cunningham totaled six on the evening. Brumfield also picked up a sack and Person accounted for 1.5 tackles-for-loss.

Defensively, Marquez Tatum compiled a team-best eight tackles for the Wildcats, followed by seven apiece from Elijah Jenkins and Justin Jefferson. The trio combined for four tackles-for-loss and 2.5 sacks.

WIth the win, Northwest improved to 3-0 on the season, while Pearl River suffered its first loss. The Rangers will return to the friendly confines of Bobby Franklin Field next Thursday against Itawamba, a team that improved to 1-2 after an overtime win against Northeast.

Kickoff against the Indians is scheduled for 7 p.m. with pregame coverage on Ranger TV beginning at 6:30 P.M.