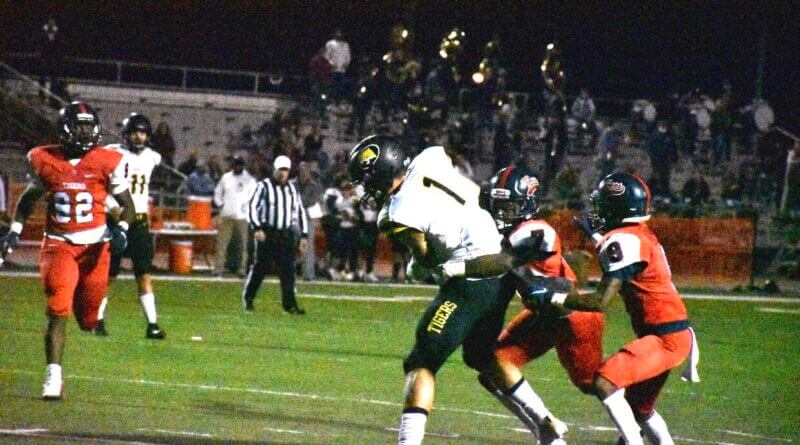 By Johnathan Williams for DeSotoCountyNews.com

In a battle where everybody in the stadium was on the edge of their seats, Hernando climbed out of the rubble and came out on top as they went on to beat South Panola by a score of 36 to 33. As College Gameday sports analyst, Rece Davis, would say, “This game was tighter than spandex on a sumo wrestler,” and that quote would be a perfect way to describe this game.

The first quarter was all about South Panola. They managed to force Hernando’s offense to a quick 3 & out on the opening drive. South Panola would then go on a long five minute drive and finish it off with Sophomore Running Back, D’Mariun Perteet, punching  the football into the  end zone to score the first points of the game. Hernando’s first points would not come until near the end of the first quarter when they were able to block a punt with South Panola backed up near their own end zone and get a safety.

Hernando began to rally back off of the blocked punt and was able to give the ball to Shawn Wade for his first of many touchdowns in this game giving them the lead 9-7 over South Panola early in the second quarter. That lead did not last long, as South Panola’s Senior Wide Receiver, Cam Wright, would catch a quick slant pass and take it to the house with a 70 yard touchdown.

South Panola’s defense then continued to do  what they did all game long and that was putting pressure on the quarterback. Hernando’s Junior Quarterback, Zach Wilcke, would throw an interception on back to back drives which would later help South Panola increase their lead even more. D’Mariun Perteet was able to get a one yard touchdown to make the score 21-9. Luckily, Wilcke was able to find Senior Wide Receiver, Reed Flanagan, for a 26 yard touchdown to make it a one score game before halftime with a score of 21-16.

“[Our team] was a little bit jittery coming into this big game, but at halftime we talked about how we have not played our best football ,but we were still in it,” said Hernando’s Head Football Coach Will Wolfe. “What we needed to do was to come out and play the type of football we knew we could play.”

Hernando hit the field in the second half with a chip on their shoulder. Shawn Wade continued to be the guy Hernando leaned on as he rushed for a five yard touchdown, but failed to convert on the two point conversion. South Panola did not have a problem running the ball tonight as Senior Running Back, Martez Clark, would exploit Hernando’s defense with a 66 yard touchdown to take back the lead 27-22 after a missed two point conversion only for Hernando to go on a 15 play, 76 yard drive which would end on a one yard touchdown by Shawn Wade to give Hernando back the lead with the score of 28-27 headed into the fourth quarter.

South Panola entered the fourth quarter with the ball in their hands and they made the most of it by handing the ball off to D’Mariun Perteet for a 10 yard touchdown which would make it his third touchdown of the night to give South Panola the edge over Hernando by a score of 33-28 after failing to get the two point conversion once again. Hernando would respond by marching down the field and giving the ball to Shawn Wade once again to score a one yard touchdown to recapture their lead to make the score 36-33 after successfully making the two point conversion.

With only three minutes left on the clock, Hernando knew they needed a big stop to win this  game, and they did exactly that. As South Panola looked like they were putting together a nice drive, Hernando was able to strip sack Sophomore Quarterback, David Hubbard, recover the football, and take a knee to end the game. Hernando would go on to win their first playoff game since 2001 where they defeated Kosciusko with a score of 15-14.

“Our kids played great but hats off to South Panola.” said Coach Wolfe. “We have battled all year and we didn’t quit believing in each other. It’s so fun to go to practice everyday because they work hard.”

Hernando will be on the road once again next week as they will try to knock off the reigning 6A State Champions, the Oxford Chargers, in the second round of the playoffs.