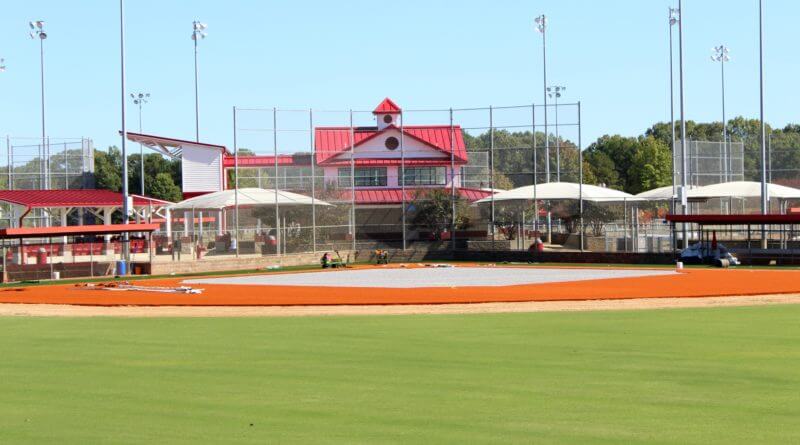 The Snowden Grove Park area of Southaven is busy with new improvements being put in place for the recreational, parks, and entertainment sector of DeSoto County’s largest city.

One is to put artificial turf on the diamonds at Snowden Grove and also at Greenbrook Park. The other is the construction of a new soccer complex north of the baseball diamonds.

The turf installation, an aggressive $5.583 million project, is underway, and according to a recent posting on the official Southaven website, Mayor Darren Musselwhite expected it would be done by the spring of next year. The hope is that the project will be ready for the first tournaments scheduled for next spring.

The outfield for the diamonds will remain as natural grass, however Field Turf is being installed along the foul lines and the infield areas. That means future tournaments starting next spring will be able to play on the new surfaces, including the annual Dizzy Dean World Series held in Southaven each July.

FieldTurf Inc. is installing the turf and Musselwhite wrote in his blog post the playing field is among the best around.

“Specifically, this turf has the most advanced technology for making the speed and bounce of a batted ball like natural surfaces as well as a cooling technology to minimize the drastic heat difference with artificial turf,” said Musselwhite.

Improvements in other communities caused city officials to look at doing their own upgrades. It may sound like “keeping up the Joneses,” but Musselwhite said it was a needed move to make.

“This is purely a business decision by the City,” said Musselwhite. “Most competing parks in our region have already converted to turf and we must give our customers what they want.”

The mayor points to the economics of keeping the city’s facilities the best possible.

“The addition of “turf” will continue to make our city the top choice in youth sports venues for many years to come,” the mayor said. “Tourism is a major component of our economic success with baseball and softball producing approximately $12 million annually in total dollars spent in our city and total economic impact of approximately $25 million annually.”

At the same time, turf installation should save the city money in expenses, Musselwhite said.

“Replacing the natural infields will save approximately $216,000 annually in labor costs for maintenance and add an estimated $350,000 annually in direct revenue to the City by eliminating tournament rain-outs and lost revenues from teams changing venues due to a rainy forecast,” said Musselwhite.

While the turf project is starting up, a new soccer complex is also being constructed at Snowden Grove Park.

Sod was being installed this week on the seven fields at the complex, located north of May Blvd. along Snowden Lane.

About $5 million is the investment in the plan that was approved in 2018 by the Board of Aldermen, placing a soccer facility more centrally located to the entire county and should be larger than other complexes in DeSoto County.

Youth soccer, along with elite programs such as DC Galaxy, will use the complex that will have parking and other facilities with it.

Current plans are to have the soccer fields ready by late this year.