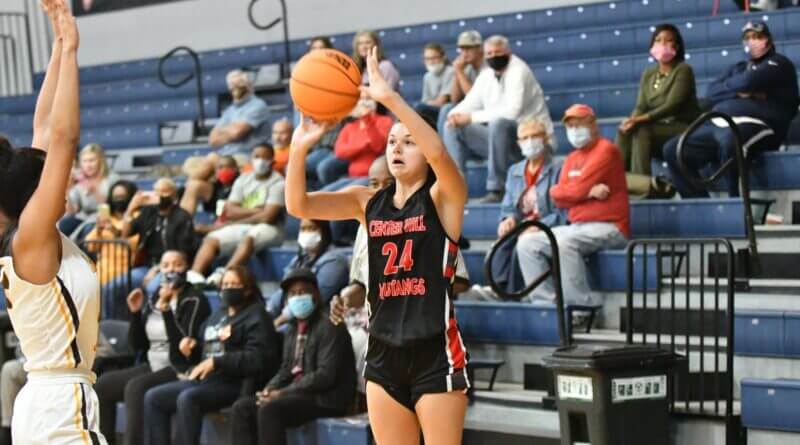 The Center Hill Lady Mustangs built a big early lead and pulled away late to come away with a 74-57 victory over the East Union Lady Urchins at the Hoops for Hope Challenge at Lewisburg on Saturday.

The Lady Mustangs jumped out to a 24-10 first quarter lead thanks to the solid play of Kayleigh Prentiss, Dominique Collins and Jairya Rankins who contributed all of the Center Hill points in the opening quarter. Rankins, a freshman, hit a pair of three pointers in the quarter.

The Lady Urchins battled back in the second quarter and cut into the Center Hill lead thanks to 10 points from Maggie Mcvey but the Lady ‘Stangs were able to maintain their advantage thanks in large part to hot shooting from three.

Hope Mealer connected on a trio of outside shots in the second and Center Hill got another trey from Rankins as the Lady Mustangs took a 40-35 lead into the break.

East Union proved resilient though, as they briefly took a lead to start the 3rd quarter. Now trailing 42-40, Center Hill turned up the defensive intensity which proved to be a solid strategy.

The Lady Mustangs closed the third on a 16-4 run that included three straight transition buckets from Prentiss and two pairs of free throw makes from Mealer to take a 56-46 lead into the final fram.

Center Hill would not trail again, closing out the contest with 5 made free throws and a dagger three pointer from Mealer with 75 seconds to play.

Kayleigh Prentiss would lead with 20 points while Hope Mealer and her four made three’s saw her end the night with16. Dominique Collins and Jairya Rankins would round out the double digit scorers with 15 and 13 respectively.

Center Hill moves to 3-2 on the season. They are back in action Thursday against Covington (TN). More pictures from Saturday available on the DeSoto County Sports Facebook page and on Instagram (sportsmississippi).