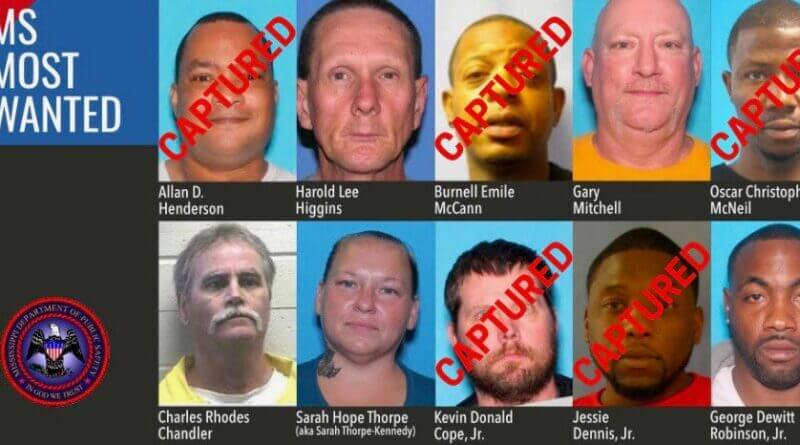 On Friday, Jan. 8, Mississippi Crime Stoppers received anonymous tips from the public regarding Allan D. Henderson. The  Mississippi Bureau of Investigation and the US Marshal Service Task Force  apprehended Henderson without incident in the Jackson area. Henderson  is being held at the Madison County Correctional Facility pending being  taken into custody by the Mississippi Department of Corrections (MDOC).

Henderson was wanted by MDOC for absconding supervision. He had been  granted earned time release by MDOC in 2016 and had not reported to his  probation officer since February of 2019. Henderson was previously  convicted of Manslaughter after he strangled his girlfriend to death and left  her body outside a daycare in Pearl. Henderson was also convicted of  Child Abandonment after he left his deceased girlfriend’s nine month old  child with her deceased body and fled the scene.

On Sunday, Jan. 10, the Mississippi Bureau of Investigation  received information that Oscar C. McNeil turned himself in to Warren  County Sheriff Martin Pace after being listed on Mississippi’s Most Wanted.  McNeal was wanted by MBI and the Jefferson County Sheriff’s Department  for Aggravated Assault and Armed Robbery.

Also on Sunday, Jan. 10, the Mississippi Bureau of Investigation  received information that Kevin D. Cope Jr. was arrested by the Clinton  Police Department and is now being held in the Amite County Jail. Cope  was wanted by MBI and the Amite County Jail for two counts of Child  Fondling.

On Monday, Jan. 11, the Mississippi Bureau of Investigation  received information that Jessie Dennis Jr. was in custody and being held  in the Leflore County Jail. Dennis was wanted by MBI and the Grenada  County Sheriff’s Office for Rape.

On Tuesday, Jan. 12, the Mississippi Bureau of Investigation  received information from the Harrison County Sheriff’s Department that  Burnell E. McCann was in custody and being held in the Jefferson Parish  Correctional Center located in Louisiana. McCann was wanted by MBI and  the Harrison County Sheriff’s Department for Failure to Register as a Sex  Offender.

“The Mississippi Bureau of Investigation is proud to announce the  establishment of the Mississippi’s Most Wanted List,” said Lieutenant  Colonel Lee Morrison, Director of MBI. “The immediate success of the  program is truly a collaborative effort between the citizens of this state and  law enforcement. The apprehension of these dangerous individuals is a  prime example of how the phrase “See Something, Say Something” plays a vital role in protecting our communities.”