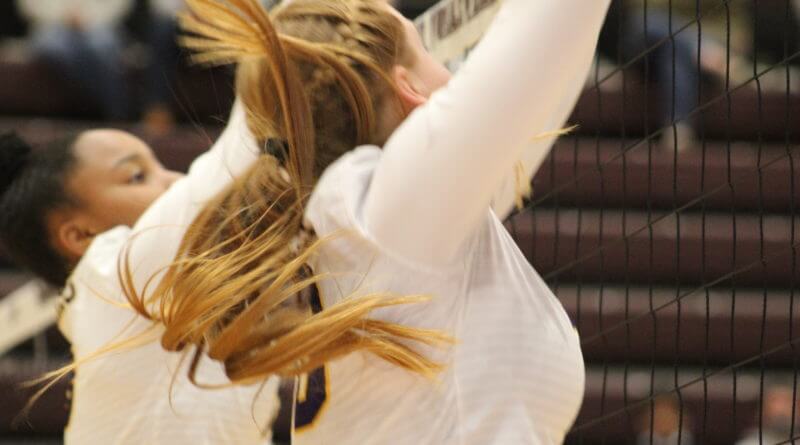 DeSoto Central, considered among the top volleyball teams in Mississippi, stepped out of division play and also stepped out-of-state Tuesday, Sept. 29, challenging the Collierville Dragons in the CHS Fieldhouse. However, the home team defended its court with a three-set sweep of the Lady Jags, 25-19, 25-19, 25-20.

Both teams came into the match highly ranked. DeSoto Central was number one in Mississippi overall and 6A rankings, according to the prep sports service MaxPreps. The Lady Jags were also in the top 40 nationally at number 47.

Collierville, meanwhile, was ranked sixth for all Tennessee teams by the same service.

Tuesday, Collierville broke open the first set that was tied early at 4-4 and proceeded to take an 11-5 lead before DeSoto Central called a timeout.

The Dragons would come out the timeout and scored six of the next nine points to take a 17-8 lead and force another Lady Jag timeout.

“We definitely started out slow in the first set,” said DeSoto Central coach Margaret Falatko. “They have a fast tempo offense and It took a while for us to figure out what we needed to do and the adjustments we needed to make to slow the tempo down. When we did that, we did a lot better.”

The Lady Jags would get back within 22-15 before a Collierville kill and getting two of the last six points gave the home team the first set victory.

In the second set, Collierville took an 8-5 lead, but DeSoto Central would then forge a 10-10 tie and a 15-13 lead that forced the Dragons into a timeout.

Collierville would come out of the timeout to score five of six points, leading to the Lady Jags to call a timeout.

“We had to slow the tempo down to give us an opportunity to terminate balls instead of relying on our defense and hoping they would make a mistake,” Falatko said.

The Dragons put the set away with a kill to make the score 20-17, then a double hit and a service error increased the lead to 24-17 and a ball hit into the net finished the set at 25-19.

The deciding set would have Collierville lead 5-2 early and 13-8 when DeSoto Central called a timeout. The Lady Jags were able to get within 16-13 Dragons but a shot hit long found the Dragons on top 20-15. A soft shot over a block made the score 23-19 Collierville and two unreturned shots from there led to the 25-20 set win and the match.

Taking on a good opponent out of the division schedule helps her team get ready for the postseason, Falatko said.

“It just kind of exposes some of the things that we need to work on as we head into the playoffs,” she noted. “It shows that we have the ability to dig deep and play hard against good teams. Collierville has some great hitters, their libero was phenomenal. This gave us an opportunity to get more mentally tough.”

Statistics provided by DeSoto Central after the match had Amonie Silas with 14 kills and seven digs. Gracie Tacker made 27 assists and two blocks. Megan Harris had 12 digs and Kennedy Smith offered nine kills, and Kasey Scruggs had three blocks.