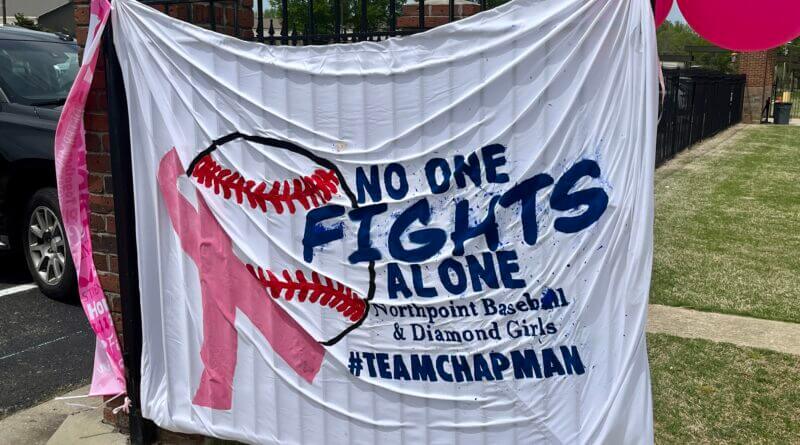 Photo: The banner greeted fans at Northpoint Christian School ahead of Saturday’s baseball contest, a show of support to the mother of a player battling breast cancer. (Bob Bakken/DeSoto County Sports)

On a beautiful Saturday afternoon for baseball, the Northpoint Christian Trojans and their fans broke out in pink to support DeSoto Hope and the mother of Trojans center fielder Sammy Chapman, who is battling breast cancer. DeSoto Hope is the local support group for sufferers and survivors of the disease.

Several players wore pink-colored leggings as part of the uniform and a solid home crowd came out in pink T-shirts that read, “No One Fights Alone.”

“We wanted to do something special for her, let her know we’re praying for her and are on her side,” said Northpoint coach Stephen Kirkpatrick. “Northpoint community really showed out today (with the pink shirts).”

Something else broke out in the afternoon contest at Northpoint: the Trojans’ bats, to the tune of 12 hits against St. Benedict at Auburndale pitching in an 11-0, five-inning victory. It was an offense that backed up the pitching of Jay Ferguson, stingy in allowing just three hits to the Eagles.

“The biggest thing for us was Jay Ferguson came in and set the tone in the first inning, throwing strikes and getting strikeouts,” said Kirkpatrick. “Consistency is the name of the game, especially in high school baseball.”

Northpoint jumped on the Eagles quickly, scoring four times after SBA was set down in the first inning. The Trojans would add a run in the second, three in the third, one in fourth and two more in the fifth to end the game with the run-rule.

James Smith drove in four runs for Northpoint in the win, including the two-run double in the fifth that ended the contest, one of three doubles Smith smacked for the Trojans.  Rob Hayes, Conner McNatt, and Hudson Brown also doubled to power the offense. Seth Giamportone also drove in three Northpoint runs.

Ferguson struck out nine and walked one for the pitching victory.

A big pair of games now awaits Northpoint with district games against Lausanne Collegiate, beginning on the road and back in Southaven on Tuesday.

The Trojans and Lynx are the top two teams in the TSSAA Division 2-A district and a bye in the first round of the playoffs is up for grabs in the series.

ALSO SATURDAY…Germantown’s Jacob King’s walk-off single in the bottom of the seventh inning ended the Lewisburg baseball season when the home Mavericks defeated the Patriots 4-3. The Germantown win swept the best-of-three first-round MHSAA 6A playoff series 2-0. Jacob Hill hit a solo homer for Lewisburg, which had to rally with a run in the top of the seventh to tie the contest at 3-3. Jarrett Morris also doubled to lead the Lewisburg offense’s four-hit attack.  Germantown will play region champion Hernando in the next round of the playoffs, scheduled to start Friday at Hernando.

Center Hill saw their first round MHSAA 6A series with Clinton knotted at 1-1 after the visiting Arrows shut out the Mustangs 4-0 at The Hill Saturday night.  Game three will be at Clinton Monday evening.

Southaven also staved off elimination with a 2-1 victory over Grenada Saturday in Southaven. Game three is Monday in Grenada.

The Hernando girls had the best team finish among DeSoto County schools at the MHSAA 6A North Half track and field meet in Clinton on Saturday.

DeSoto Central led the county boys’ performances at the North Half meet with a sixth place finish with 54 points. Center Hill was eighth with 24.50 points, Lewisburg was 12th with 8 points, followed by Hernando and Olive Branch. The only county boys individual champion was Jalen Jones of DeSoto Central in the 300 meter hurdles.