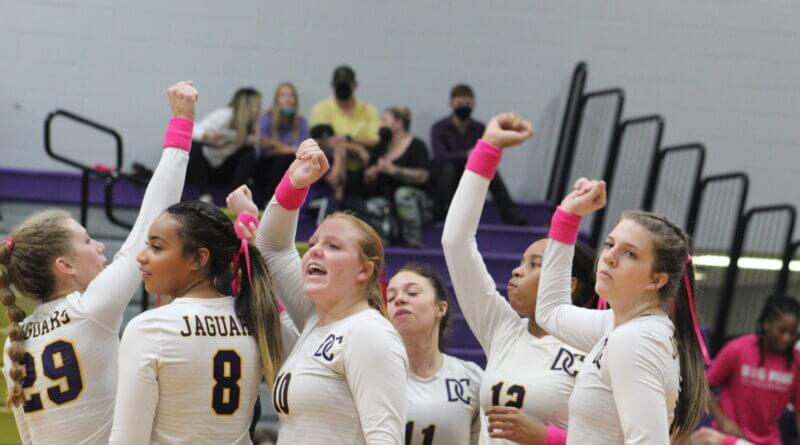 MHSAA 6A volleyball playoffs (first round)

MHSAA 5A volleyball playoffs (first round)

MHSAA 6A volleyball playoffs (second round)

MHSAA 5A volleyball playoffs (second round)

DeSoto Central’s effort to return to the Mississippi High School Activities Association state championship volleyball finals took its first step Tuesday in Southaven. The Lady Jags rolled past the Tupelo Lady Wave 3-0 to reach the second round, where they will host Germantown (Madison) Thursday night.

DeSoto Central took a 5-3 lead in the first set after a Madison Young block for a point, followed by the next three points featuring an Avery Wolf ace.

Tupelo would rally back and tie the set at 9-9 before the Lady Jags retook the lead and never let it go.

Kennedy Smith had successive kills for a 16-11 lead and when a Lady Wave volley went too long, the Lady Jags had a 20-12 lead. DeSoto Central scored five of the next nine points to take the set 25-16, underlined by two kills by Smith, including the set winner.

The second set went completely to DeSoto Central, taking a 5-0 lead early and it became 12-1 before Tupelo could put something together. The run included two Lindsey Cowart aces, a block for a point by Katelyn Day, and another Smith kill.

Tupelo got within 16-5 when the Lady Jags put another run together to make it 22-8, a run that included a volley violation and a shot into the net, and another kill by Smith. A Tupelo violation for too many hits gave DeSoto Central a 23-8 lead and a kill by Wolf finished the set for DeSoto Central 25-9.

The third set was much of the same for the Lady Jags, taking a 5-3 lead and growing it to 10-4 after a double hit violation by the Lady Wave.  A service ace by Reese McIntosh fashioned a 15-7, followed by a small Tupelo comeback before another Smith kill gave DeSoto Central a 20-13 lead.

For the match, Smith had 14 kills and eight digs. Kasey Scruggs had eight kills and nine digs. Avery Wolf had five kills, 12 digs, and served two aces. Reese McIntosh had 14 digs and an ace.  My Young had 13 assists and McKenzie Brewer had 11 assists.

With the victory, DeSoto Central will host its second round of the playoffs Thursday evening on its home court, facing Madison Central, which sidelined Hernando Tuesday night 3-0. Thursday’s match will start at 5:30 p.m.

It is homecoming week at Lewisburg and all homecoming activities scheduled for Friday are also moved up to Thursday, according to the athletic department Twitter account.