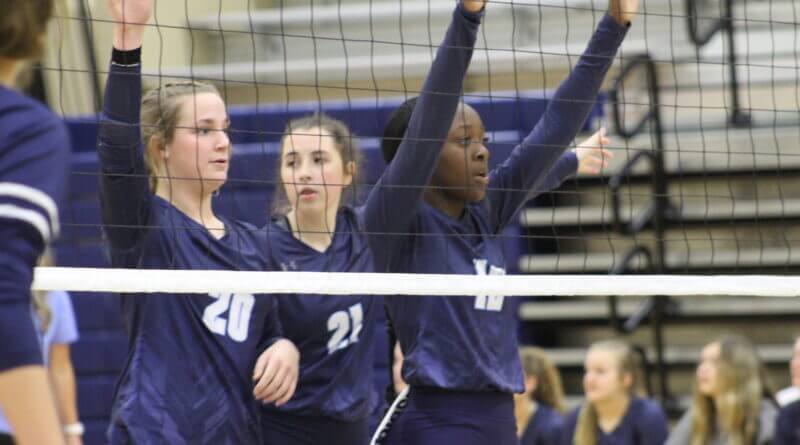 The Lady Trojans (25-4) now join Battle Ground Academy of Franklin, Notre Dame of Chattanooga, and Concord Christian of Knoxville, starting Tuesday, to determine a state champion.  Pairings were not immediately available late Saturday, but the four teams will be seeded to determine the semi-final pairings.

The semi-finals and finals are played at Middle Tennessee Christian School in Murfreesboro.

Northpoint took a 5-4 lead in the first set and a service run from Maycee Gross grew the lead to 8-4. A service ace from Quinn Thurman increased the margin to 12-5 and two more points forced a Knoxville Grace timeout. A kill from Brylee Faith Cherry put Northpoint in striking range of the first set at 20-11, followed by a Quinn Thurman ace and a point from Isis Reid off a Grace block finished the set at 25-14.

Grace came out strong in the second set with a 5-1 lead but just as quickly Northpoint came back and got within 6-5. From there, five straight Lady Trojan points grew the margin to 10-6.

A service ace from Quinn Thurman gave Northpoint a 14-8 lead and four of the next five points fashioned an 18-9 edge and a timeout from the Lady Rams.  Cherry came out of the timeout with a kill to give the Lady Trojans a 20-10 lead. Northpoint went on from there to a 25-12 set win.

Northpoint took a 15-8 lead when a Lady Rams volley found the net and no further and when the lead became 18-10, Grace took a timeout hoping to get something together.

Cherry added a kill, Addie Kate O’Bar served an ace and when a Grace volley was struck into the net, the match was over with the 25-15 third-set victory.