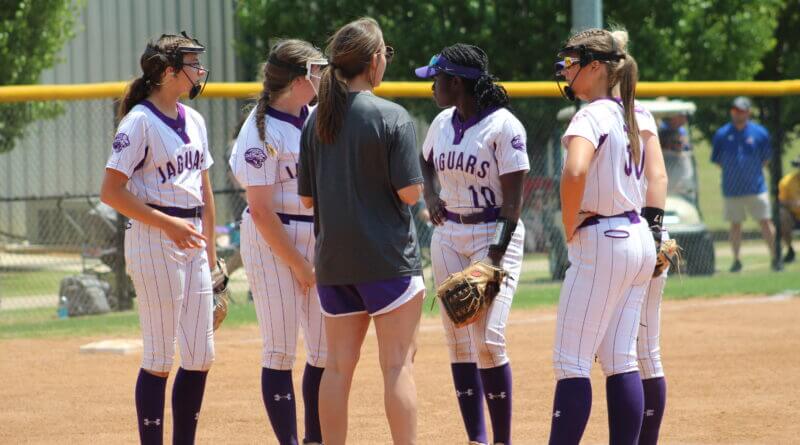 DeSoto Central pounded its way into the third round of the MHSAA 6A softball playoffs Saturday afternoon with a dominating 18-1 victory over Tupelo, a five-inning beat down that gave the Lady Jags a two-game sweep of the Lady Wave. Saturday’s win at Tupelo followed Thursday’s series-opening 2-1 victory at DeSoto Central.

With the win, the Lady Jags now face either Madison Central or South Panola in the third round, with game one Friday night at DeSoto Central.

Savannah Wilbanks and Londen Armstrong led the offense with three hits each. Arin Dale and Mattie Melton each drove in a trio of runs for the Lady Jags. Megan Vinson homered, while Armstrong, Reagan Dale and Melton each doubled.

“The first time we played them we struggled to hit slower pitches,” Ford said. “So I brought in some younger kids to practice for us to work on slower pitches.”

In the circle, Jorja Wheeler struck out five and walked four while allowing just one hit for the victory.

Arin Dale’s single drove in Vinson with the game’s first run in the Lady Jags’ first inning. Tupelo would answer with a run scored on a fielder’s choice out for a 1-1 tie after one.

But the Lady Jags took the lead for good with another run in the second when Reagan Noble scored on an Arin Dale ground out.

DeSoto Central broke the game open with four runs in the third, followed by another solo run in the fourth.

However, the clincher came with a change of pitchers in the fifth inning after the leadoff batter reached base. Jaycee Thompson came to pitch and the Lady Jags jumped on her pitching to post 11 runs before the inning ended. The game ended in the home half of the fifth after Tueplo’s lead-off hitter reached base on an error but was left stranded.