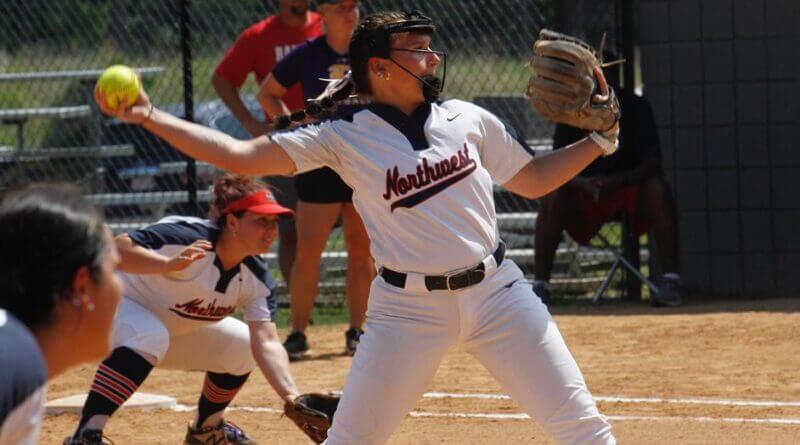 Photo: Gabby Dickerson struck out six batters against two walks for her 25th win in the circle, as Northwest took down Jackson College (Mich.) in the opening round of the NJCAA Division II Softball Championship. (Photo credit: Natalie Davis

OXFORD, Ala. – After jumping ahead with a one-run lead in the first inning, No. 5 seed Northwest used a five-run frame in the third inning to break the game open for a 9-1 run-rule victory against 12th-seeded Jackson College (Mich.) on Tuesday afternoon.

Northwest improved to 36-13 with the win, tying the program’s single-season wins total. The Rangers last achieved 36 victories during the 2007 season, finishing with an identical 36-13 overall mark. Jackson College dropped to 34-13 with the loss.

With two outs in the bottom of the first, Saige Koczka delivered a single up the middle to keep the inning going for the Rangers. Molly Harris followed with a single of her own, before Maddie Brower delivered the first run of the game on an RBI-single to the Jets’ shortstop, scoring Koczka from third.

Gabby Dickerson sent Jackson College down in order to start the second inning, but Northwest also went down scoreless in the home half of the inning, leaving two runners on base. The Jets would get a double to lead off the third inning, but Dickerson once again retired the next three batters to hang another zero on the board.

Koczka led off the scoring burst in the bottom of the third with a leadoff single, later scoring on Brower’s double to right-center. Caylee Comer followed up Brower’s RBI with a single to the same spot, scoring Brower to make it a 3-0 lead for the Rangers.

With two outs, the Rangers kept the scoring coming. After Meredith Owen delivered a single to center field, Northwest would get back-to-back runs off a wild pitch and a throwing error by the third baseman. Following a brief weather delay, Laila Armstrong would reach base on another defensive error, plating the sixth run for Northwest.

After leading off the fourth with another double, Jackson College finally broke through on the scoreboard with a sacrifice fly to center field. The Jets’ run did little to slow the momentum for Northwest though, as the Rangers added two back in the bottom of the fourth off a single from Harris and a groundout from Comer, stretching the lead to 8-1.

Jackson College looked for a rally in the top of the fifth, but instead fell victim to a popup and a pair of strikeouts from Dickerson. The Rangers were unable to put the game away in the bottom half of the inning, but Kaitlyn Bednarek’s walk-off single to right center helped seal the win for Northwest in the sixth.

For the 25th time this season, Northwest finished with 10-plus base hits in the contest, finishing with exactly 10 in the win. Koczka went 3-for-3 at the plate with a double to lead the Rangers, followed by a pair of 2-for-4 efforts from Brower and Harris.

In the circle, Dickerson moved to 25-7 on the season and notched her 16th complete game. The Olive Branch native tossed six strikeouts against two walks and four hits allowed. After today’s performance, Dickerson is now tied with Sarah Gill (2009) for the most wins by any Northwest pitcher in a single season, while her 16 complete games also ranks eighth in the Rangers’ career record books.

Next up for Northwest will be a battle against fourth-seeded Murray State College (Okla.) on Wednesday, May 25 at 2 P.M. The Aggies (46-9) are coming off a 5-4 walk-off victory in the bottom of the seventh inning against No. 13 Danville Area (Ill.). The winner of the matchup between Northwest and Murray State will square off with the winner of No. 1 Des Moines Area (Iowa) and No. 9 Kansas City (Kan.) at 10 A.M. on Thursday morning.