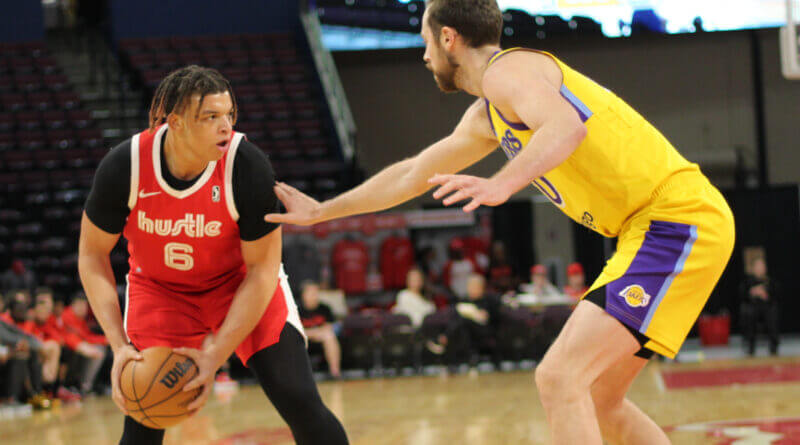 Winners of the last eight of the last nine, including three straight victories, the Memphis Hustle Thursday improved their regular season record to 1-0 with a 122-103 victory over the South Bay Lakers at the Landers Center.

“We handled things well in Vegas and really competed well,” said Hustle coach Jason March. “Tonight, this was probably the most complete effort as a group. We were very locked in and focused.”

So Thursday’s game now became the start of the actual NBA G League regular season and the Hustle got it off to a positive start with the victory.

Seven Memphis players hit for double figures in the win, led by Kenny Lofton Jr. and Jake LaRavia, who each scored 18 points. LaRavia, a former Wake Forest forward, is on assignment to the Hustle.

“Coming in and being on assignment sometimes is not easy for guys,” March said. “Jake has handled and accepted it. The guy loves to play and he can get a shot off on anyone.”

Lofton fashioned a double-double with 10 rebounds to go with his 18 points.

Scotty Pippen Jr. led the Lakers off the bench with a game-high 19 points.

Memphis took a 27-25 lead after one quarter and led 52-45 at halftime.  The Hustle broke it open with a 40-point quarter for a 92-72 advantage going into the fourth quarter of play.

March is not looking at the start of the regular season as a refresh or reboot, saying the team has been building to get to this point.

“We play a total of 50 games,” said March. “At the end of the season I’m not going to look and say, ‘What was our record in the Showcase?’ I’m going to see what our record was for the 50 games, and then see what we have done with our players.”

Another bit of a victory of sorts Thursday came at the box office, where the franchise has struggled to attract fans to the Landers Center. Outside of the 1,395 fans who came to the first game of the Showcase Cup in early November, the team has seen more than 1,000 in the building just once this year. That was Thursday night and just barely, as 1,001 was the listed attendance.

We’ll see if the trend continues on what the team calls “Hustle and Hounds” Night Friday night, again against the South Bay Lakers. Doggies get in free for the 7 p.m. tipoff.