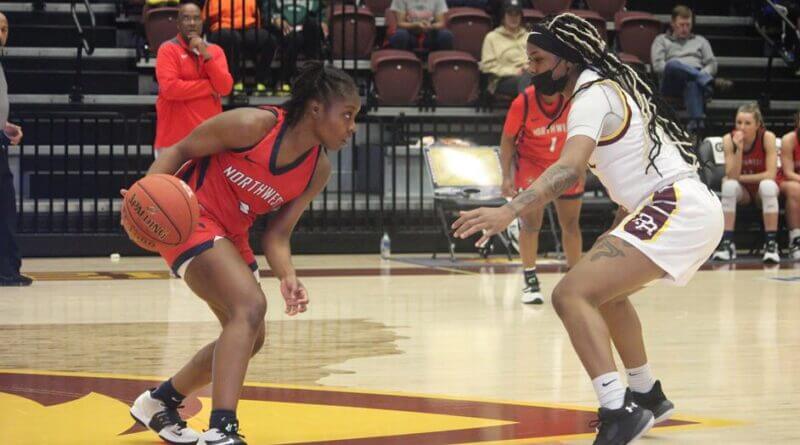 It took overtime, but the extra effort made Monday’s historic win even more special.

In front of a raucous atmosphere, the Northwest Lady Rangers rose to the occasion, upsetting No. 22 and top-seeded Pearl River with a 70-68 overtime victory in the first round of the MACCC Tournament at Marvin R. White Coliseum.

For third-year head coach Troy Howell, Monday’s victory marked his first win against a nationally-ranked program and the first ranked victory for the Lady Rangers since November 18, 2010, when Northwest defeated then-No. 4 Copiah-Lincoln 68-66 in overtime.

With the win, Northwest improved to 15-9 overall as Pearl River dropped to 19-5 on the season.

Northwest led 12-4 midway through the opening period, only for the Lady Wildcats to close out the quarter on a 6-0 spurt to close the gap to just two points entering the second quarter. Pearl River kept the hot hand going early in the period, using two baskets from Keshunti Nichols and a three-pointer from Tristen Washington to take a five point lead, 17-12.

Pearl River led 21-16 midway through the quarter, only for Northwest to tie the game back at 22-22 on a three-pointer from Maura Nunley late in the first half. The Lady Wildcats once again stretched their lead to five points, but the Lady Rangers cut the score down to two at halftime, 27-25.

Pearl River led twice by seven points in the early stages of the second half, but Northwest never backed down against the top seed in a hostile environment, a theme that would continue through the end of regulation as well. With 3:47 left in the third quarter, a three-pointer from Tierra Trotter gave the Lady Rangers their first lead of the second half, 38-37.

From there, Northwest spent the rest of the quarter widening the gap to as many as 11 points with less than a minute to go. The double-digit lead would be the only one of the game for either team, as Pearl River ended the quarter on a three-point shot from Otashae Burrage, pulling back within eight.

Northwest held onto the lead until midway through the fourth quarter, when another three-pointer from Washington tied the contest at 51-51 with 4:42 remaining in regulation. Minutes later, Halle Traylor would put the Lady Wildcats ahead by three, 59-56, with 1:30 left to go.

Foul trouble would soon catch up to both teams down the stretch, however. For Pearl River, that resulted in leading scorer Washington to foul out, while Northwest saw Sha’Kirria Everett foul out and Kolten Blakeney sit out part of the quarter with four fouls.

A pair of made free throws from Trotter helped bring the Lady Rangers back within one with 39 seconds to go, but the biggest break for Northwest came with four seconds left in regulation, as Ty’Mesha Reed missed one of her two free throw attempts. This gave the Lady Rangers a chance to use their final timeout to advance the ball downcourt.

With three seconds left on the clock, I’Yana Ragin inbounded the ball to Trotter, who dribbled just past the free throw line for the game-tying jumper, forcing overtime in front of a stunned home crowd.

Reed’s two quick baskets helped Pearl River to a two-point advantage within the first minute of overtime, only for Blakeney’s layup to even the score and Trotter’s free throws to give the Lady Rangers a 66-64 lead with 2:59 left in overtime.

A layup from Marcavia Shavers tied the game once more for Pearl River with 2:09 left, but that would be the last time the Lady Wildcats would lead or tie. After Trotter responded with a jumper on the other end of the floor, a missed three-pointer from the Lady Wildcats helped Northwest go ahead by four on Ragin’s layup at the 48-second mark.

One of the biggest factors in the victory was the performance of Trotter, who captured a new career-high of 29 points. The sophomore guard was held to just seven points in the first half, but scored exploded for 18 in the second half and seven total rebounds.

Washington led Pearl River with 16 points, followed by 11 points from Reed and 10 points from Nichols, along with a team-high 13 rebounds. Shavers also added a near double-double off the bench, scoring nine points and 10 rebounds.

With the win, Northwest advances to Wednesday’s semifinal matchup against Jones College. As the No. 4 seed in the tournament, the Lady Bobcats eliminated Copiah-Lincoln earlier in the day on Monday.

Tipoff for the Lady Rangers’ battle against Jones is scheduled for 5:30 p.m. in Poplarville. Coverage will be provided on prccmedia.com.