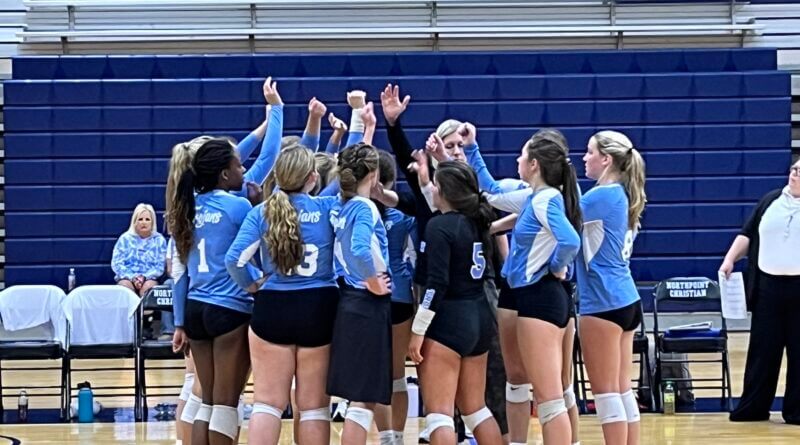 Northpoint Christian moved ahead in the TSSAA Division II-A West Region volleyball quarterfinals Monday, surviving an early challenge in a 3-1 victory over Harding Academy in a match played at Northpoint.  Set scores were 20-25, 25-19, 25-11, 25-17.

The visitors won the opening set 25-20. Northpoint took an early 5-2 lead, but Harding tied the set at 7-7 and again at 9-9, before taking the lead for good at 10-9. Another point scored by the Lady Lions had Northpoint taking a timeout.

However, Harding continued to take the game to Northpoint and at 18-13, the Lady Trojans called another timeout.

The Lady Lions increased the lead to 20-13 but that was when Northpoint rallied to get within 23-19 Harding and the Lady Lions asked for a timeout. Harding scored two of the last three points to win the set.

The intense play in the second set seemed to affect Harding the most as Northpoint raced out to a 15-3 lead in the third set. The lead became 17-5 when Harding coach Michael Sansone was tagged with a red card as he protested a four-hit call against his team. The card gave Northpoint a point and the serve at 17-5.

The deciding set was won by Northpoint 25-17 in a set that began close before the Lady Trojans five of the next six points for a 10-6 edge and a Lady Lion timeout.

Another stretch of scoring put Northpoint ahead 15-11 and another five straight points increased the margin to 20-11.  A block for a point by Isis Reid got Northpoint to 24-15 and on their way to the final 25-17 score.

For the match, Quinn Thurman had 22 kills, 16 digs, and one ace; Isis Reid also served one ace; Renee Hastings had 5 blocks; and Sophie Bauer made 30 assists. Northpoint next plays St. George’s (Collierville) in the region tournament at Trinity Academy in Jackson, Tennessee on Tuesday, Oct. 4 at 6:30 p.m.