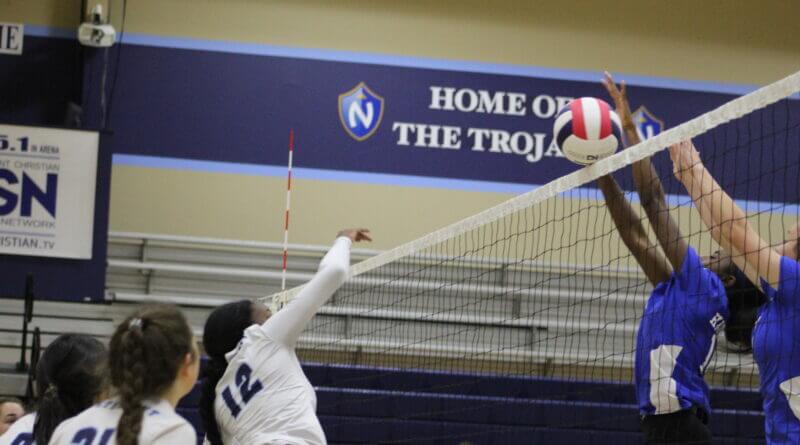 “We are getting consistent and that’s what we are looking for,” said Lady Trojans coach Kim Robinson. “We have played some tough matches this week and now we’re back in district. It was a great win for us tonight.”

The Lady Trojans took a 13-7 lead in the first set, a lead that increased to 18-7 with Sailor Cole serving before the Lady Lions were able to stop the run with a side out. Northpoint was able to continue to 24-10 when Harding earned another side out. However, the set ended when Isis Reid was able to drop a soft volley over the net and onto the floor.

Northpoint took a 4-1 lead to start the second set but Harding was able to come within 6-4 on a side out. The Lady Trojans scored five of the next six points for an 11-5 edge, forcing a Harding timeout as Northpoint’s Quinn Thurman was at the service line.

Another run of points by Northpoint moved the Lady Trojans to a 19-7 advantage and another Harding timeout with Cole again serving.  Northpoint finished the set 25-10 when a Lady Lion serve went wide of the court.

Teams traded points early in the third set, but Northpoint broke free for a 7-3 lead. Three of the next five points also went to the Lady Trojans for a 10-5 advantage and it became 20-8 when Brylee Faith Cherry blocked a shot that then fell inside the Harding sideline.

“Brylee Faith Cherry did amazing tonight,” Robinson said. “She was aggressive on the net,” with Robinson also complimenting setter Sophie Bauer for her play.

Later in the third, another shot by Abby McBride found the Harding court as the set ended 25-12 and the match won 3-0.

Ahead for Northpoint Christian are home matches against Macon Road Baptist on Monday and Lausanne Collegiate on Tuesday, before the Lady Trojans pack their bags to play at the River City Rumble in Chattanooga, Tenn. Sept. 17-18.

Robinson, in her first year as Northpoint coach, believes it is important to play teams from outside the area. She said it will help the program grow and they’ll know what might be ahead in the postseason.

“I schedule games where we are playing heavier and tougher competition but that only makes our program better,” Robinson said. “We’re not able to get that around here over and over and over again, so we’re able to go and play in these out-of-town tournaments and see our other Division II-A schools.”