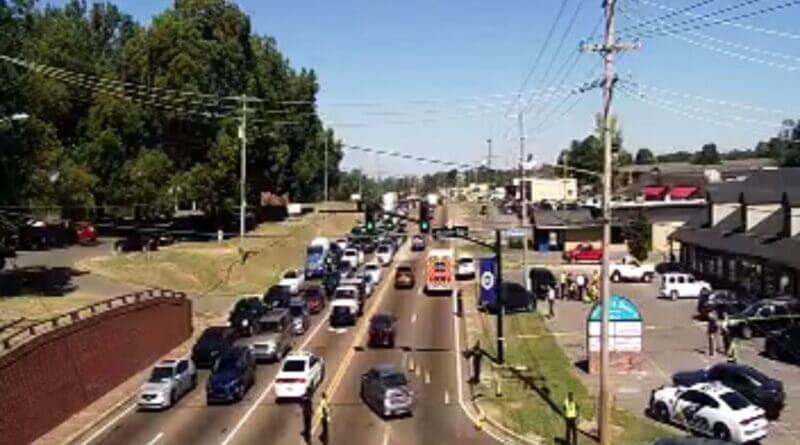 Photo: Traffic was backed up along Highway 51 at Rasco Road after an accident involving two suspects sought by Southaven Police. (MDOT Traffic photo)

Two suspects who evaded Southaven Police last Saturday were spotted and eventually captured Monday but not before an attempted traffic stop with stop sticks being deployed, and a resulting traffic accident that blocked traffic along Highway 51 at Rasco Road for part of the day.

According to police, a Red Nissan Maxima occupied by two Black males was spotted on Highway 51 at Custer. Officers recognized the vehicle as one that didn’t stop for officers in an incident on Saturday and escaped the scene.

The suspects were followed into the BP gas station at 51 and Custer and waited while assistance arrived before they tried a traffic stop on the suspects, but they tried to evade the officers, much like on Saturday.

Stop sticks flattened two tires but the suspects’ vehicle continued northbound on Highway 51, running through a red traffic light at Rasco Road, but that action caused a two-car accident.

The suspects’ vehicle was disabled at the intersection. The two suspects armed with handguns ran from the car in two different directions.

Officers caught one suspect in the roadway and the second suspect was struck with an unmarked detective unit after observing the suspect with a handgun in his hand running towards Domino’s Pizza and other businesses.

The suspects, ages 17 and 18 have not been identified and the description of the charges was not released in the information released by the police department.