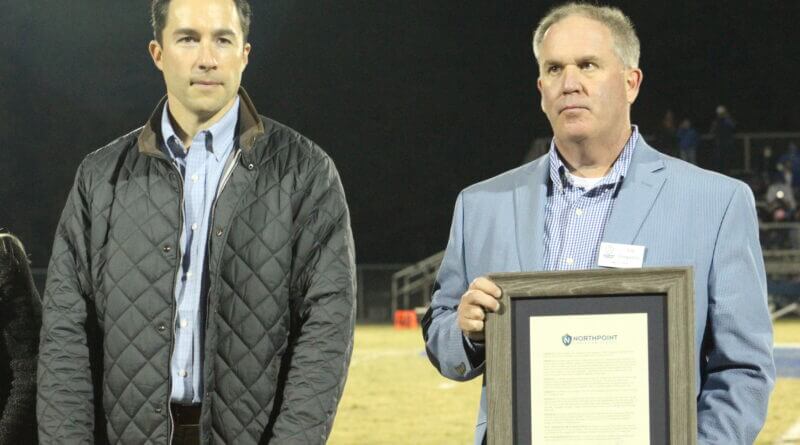 While football was the main focus for Northpoint Christian School Friday night with the TSSAA Division II-AA playoff contest against Battle Ground Academy, the school took a moment at halftime to recognize a major contribution to one of its spring programs, track and field.

The school dedicated its new track surface to Southern Baptist Education Center (SBEC) alum and former athlete Jon Pointer, who said he was glad to be able to aid his high school alma mater in this manner.

“It’s a way to give back,” Pointer said. “This is to help future generations to help them and provide them with the resources that can help them to become better people for the rest of their lives. It was a no-brainer. I was glad to do it.”

The school’s Board of Trustees approved a resolution honoring Pointer for the financial contribution gifted to the school toward the track. That resolution was presented to Pointer at Friday’s halftime ceremony.

Pointer was a 1997 graduate of SBEC who was also an accomplished multi-sport athlete of the school, especially in track and field, but he also competed in football, basketball and baseball for the Trojans.

As an athlete, Pointer had a positive impact in whatever he was involved in. For instance, Pointer was the school’s senior class president ahead of his graduation.

In football, Pointer was part of a Trojans team that was the first in SBEC history to have an undefeated season at 10-0 and went on to the North 4A championship before losing in the semifinal round of the Mississippi Private School Association (MPSA) playoffs.

MPSA was the forerunner of what is now the Midsouth Association of Independent Schools, or MAIS.

Pointer was a football all-conference and all-state team selection and went on to play college football at Samford University.

In basketball, Pointer was part of a 17-0 squad which became North 4A champions.

However, it was on the track that Pointer had his greatest accomplishments. He was a state champion in the 100 and 200 meter dash. He was part of a team that earned a North State track title.  Pointer was also part of relay teams that won championships in the 400, 800, and 1600 meter relays. Their best time in the 400-meter relay is believed to remain as a state record.

Pointer said he believes lessons learned in sports have a lasting effect beyond the field, court, or in this case, track of competition.

“Everything about a team brings and grooms you as a person and becomes the person you are today,” Pointer said. “Becoming a teammate and learning that aspect of the discipline that it takes to become a better person all comes in sports.”