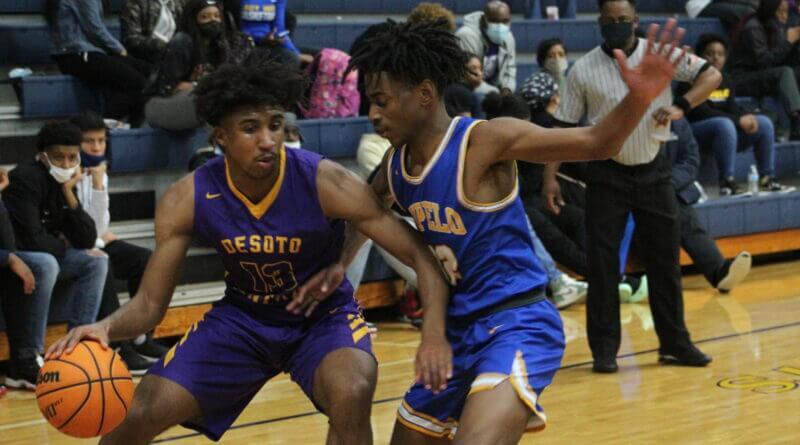 In being the number-two seed in the 6A division boys basketball tournament at Olive Branch, the Tupelo Golden Wave were designated the home team for Monday’s contest against third-seed DeSoto Central.

In being the home team, it was expected that when it came time for the tip-off, the Golden Wave would pull off their warm up jackets to show their home white jerseys.

But, either someone didn’t get the memo, or the home whites are still in the wash. Whatever the reason, Monday’s game was played with Tupelo wearing their road blues, and DeSoto Central in road purple, as they were expected to wear.

Regardless, the Wave shook off their wardrobe fashion faux pas to put together a 36-point second half and hold off the Jaguars 58-54 to advance to Friday’s division championship game.

The Wave’s rally in the third period gave Tupelo a 39-38 lead when the quarter ended. Tupelo in the fourth quarter took as much as a nine-point bulge at 52-43 before DeSoto Central made a late push that got the Jaguars within 52-48. Late in the game, the Tupelo lead shrank to 56-54 before the Wave finished off the Jaguars for the win.

Brayton Bishop paced the Tupelo scoring with 20 points, with seven points coming in the fourth quarter. London Fields added 11 with eight points in the second half, six of which came from outside the three-point line.

DeSoto Central’s standout Matthew Smith led the Jags with 15, including 7-for-8 from the free throw line. Trey Moore added 12.

Coach Blake Orman’s Jaguars will return Thursday for a consolation game against either Lewisburg or Olive Branch. Tupelo comes back Friday for the division championship game and hopefully will bring the right color uniform this time.

The Tupelo Lady Wave rallied back in the second half of a hotly contested 6A division semi-final game, surviving the attack of the DeSoto Central Lady Jags 58-55.

DeSoto Central controlled the contest early and took a 24-20 lead to intermission.

“We’ve been trying to capitalize more on offense,” Petty said. “Just trying to get everybody involved because when you got one person handling the ball, it’s easy for the defense to play you.”

But, the rails fell off in the third quarter for the Lady Jags with the Lady Wave countering with a 23-point quarter to take a 43-37 lead into the final eight minutes.

“We gave up too many offensive rebounds,” Petty said. “Our shot selection just wasn’t good at the moment. They finished, they made free throws and we didn’t.”

Midway through the final quarter, DeSoto Central had regained the lead to 52-47 before Tupelo recovered and had a 54-52 lead with 45 seconds remaining.

Makayla Riley of Tupelo led all scorers with a game-high 21 points. Halle Traylor added 17, all of which were scored in the second half.