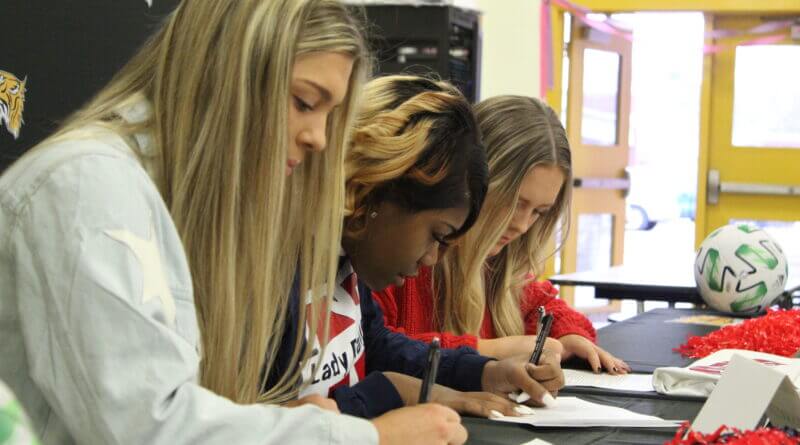 It could be considered a package deal. Three members of this year’s Hernando High School girls’ soccer team are heading to Senatobia next fall to be part of the Northwest Mississippi Community College women’s program under coach James Beattie, who is in his first year leading the Rangers. Beattie was named Rangers’ new coach on Dec. 1.

Beattie is only the third head coach since the addition of women’s soccer at Northwest in 2002. He replaces Levi Nunnally, who resigned in October following a seven-year stint with the program and is now Director of Soccer for the City of Southaven.

The Hernando trio signing with Northwest Tuesday morning are Addy McCann, Jerkaila Jones, and Arlee McGaughey, major components of this year’s Lady Tigers group for first-year coach Emily Rose, who said all three were important to her as she tries to establish her program.

“This year has been a big year of changes for them,” Rose said. “They all were great senior leaders, all did a great job and got behind me. They stood up for me and with me.”

Beattie, a Glasgow, Scotland native who played at Mississippi Gulf Coast Community College and Oklahoma City University and who has played professionally back in Scotland, told Rose he wanted all three to come and join his program.

“Coach Beattie said he wanted all three all together,” Rose said. “They have all played together since they were little kids and now they’re going to the next level.”

Under Rose, Hernando reached the first round of the MHSAA 6A playoffs this year, and Rose said it was due in part of the leadership of McGaughey, Jones up front, and McCann at the goal..

“Addy is one of the best goalkeepers in DeSoto County,” Rose said. “She will be an awesome asset for Northwest.”