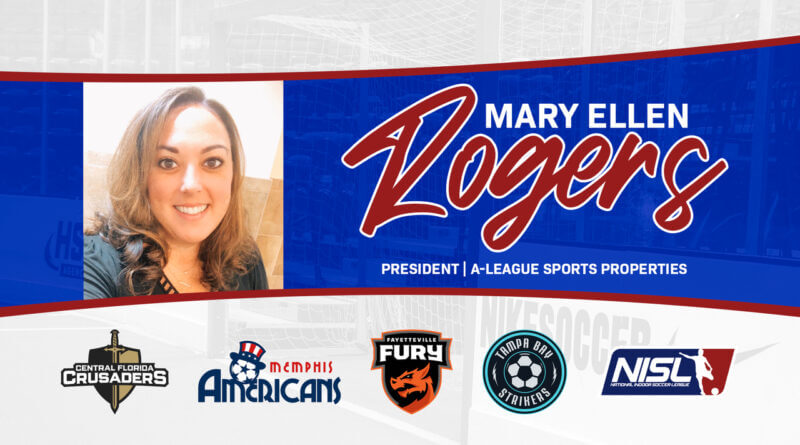 In this role, Rogers will oversee operations and lead the front office teams and day-to-day work of the four clubs that A-League manages in NISL. The Memphis Americans and Fayetteville Fury competed in the NISL’s inaugural season in 2022, with the Tampa Bay Strikers and Central Florida Crusaders joining for the 2023 campaign.

“I am thrilled for the opportunity to join A-League Sports and the NISL family,” Rogers said. “I was fortunate enough to be on the sidelines last year, and I’m eager to step into this executive level role and help build on the tremendous momentum the league has.”

“I’m excited to add Mary Ellen to our leadership team, her operations experience will be a great asset as we look to continue to grow our company and footprint,” added Andrew Haines, CEO of A-League Sports and Executive Director and Co-Owner of NISL.

Rogers comes to A-League Sports from her most recent position as the Chief Operating Officer for the Girl Scouts Heart of the South, a role she held for four of her nine years of service. In addition, Rogers has led staff and volunteer teams for the Amateur Athletic Union (AAU) and two YMCAs in multiple states. The teams, under Rogers’ guidance, experienced rapid and consistent results in the areas of innovation, fiscal management, community involvement, professional development and customer engagement.

The Memphis native has held many roles in the sports world, primarily in Memphis and the Mid-South, working collegiate and professional events. Among the sports entities she has worked with include: University of Memphis, University of Mississippi (Ole Miss), Rhodes College, University of Central Florida (UCF), American Athletic Conference (AAC), Conference USA (C-USA), NCAA, NBA, TBT and international tournaments for Triple Crown Sports and Basketball Travelers.