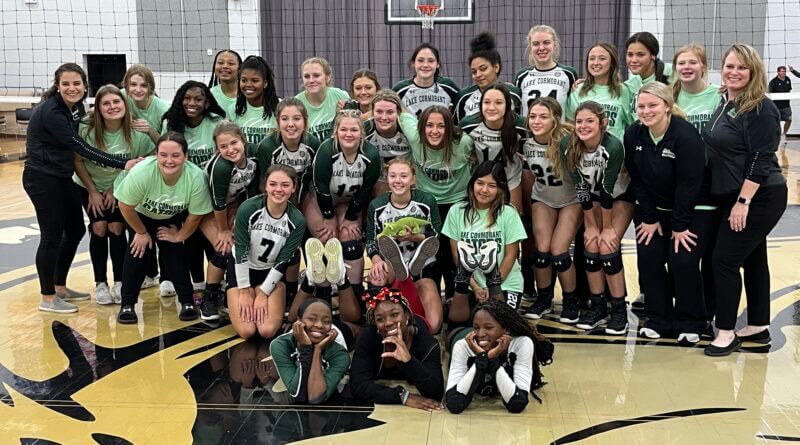 Lake Cormorant will head to the MHSAA 5A state volleyball championship match Thursday afternoon at Mississippi State University against Long Beach. The Lady Gators defeated Columbus New Hope in the three straight sets Monday night to claim the North Half championship and claim their spot in the state championship game.

Although it was a 3-0 sweep on New Hope’s home floor in Columbus, the win didn’t come easy for coach Christina Morgan’s Lady Gators. Set scores indicated the closeness of the match, with Lake Cormorant winning 27-25, 25-19, 28-26.

“I think they just had the ‘refuse to give up’ attitude tonight, either when they would get down or come back,” Morgan said. “We had a lot of girls step up tonight, too.”

The Lady Gators took an early lead at 6-2 in the first set, but New Hope bounced back for a 19-13 lead when a Lake Cormorant volleyball went wide and out of bounds.

After a timeout, Lake Cormorant started a comeback which got them back within one point at 21-20 New Hope after two kills from Ariana Woods, one into a block and the other to the floor. Woods would later serve an ace that tied the set at 23-all and it would go back-and-forth until Lundyn Wilson scored a kill to 26-25 Lady Gators and the following point resulted in the set win.

Morgan said she has the schedule set up for her squad to get them ready for the playoffs, and cited the loss to Lewisburg in the DeSoto County tournament finals as an example.

“We play a very competitive schedule and I think that helps us get prepared for the playoffs,” Morgan said. “We played in the county championship against Lewisburg and it was point to point, just like this (tonight).”

In the second set, Lake Cormorant took a 10-7 lead but New Hope would score five of the next seven points to forge a 12-12 tie.  At that point, Lake Cormorant reeled off three straight points for a 15-12 lead and a Lady Trojan timeout.

The Lady Gators grew the lead to 20-14 after a Jania Rose service ace. A long volley out of bounds by New Hope got Lake Cormorant to set point and the next point claimed a 25-19 set win.

In the final set, Lake Cormorant would lead by five at 10-5, which grew to 18-10 when a Lady Gator point was scored off a block. But that was as big a lead as there would be for the rest of the set, as New Hope scored 10 of the next 14 points to get within 22-20 Lake Cormorant.  The Lady Trojans eventually got a 22-22 tie, but a Lady Gator volley that fell inside the back line got an edge for the visitors at 23-22 Lake Cormorant.

The set continued to 27-26 Lady Gators, setting up the final point for the North Half title and started the celebration.

For the match, Sofia Gonzalez led Lake Cormorant with 23 kills. Jania Rose had five aces and 29 digs and Woods had two blocks. Dallas White was credited with 42 blocks.

Lake Cormorant will face Long Beach, a 3-2 winner for the South Half championship Monday night. The match is scheduled for 4:30 p.m. at Mississippi State’s Newell-Grissom Building in Starkville, or 30 minutes after the previous contest’s finish. Two years ago, the Lady Gators defeated Long Beach in five sets for the championship.