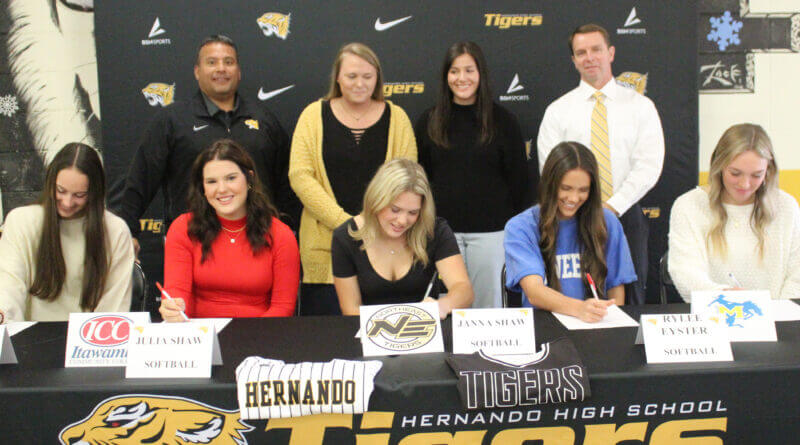 Five important components of Hernando High School’s first MHSAA 6A state softball championship team have officially declared where they will be playing next after they try to repeat as state champs this spring.

A signing ceremony was held Wednesday morning for the group at the school with a large contingent of friends and family on hand.

Heading off to play college softball after graduation this spring with scholarships in hand will be Rylee Eyster, Ally Callahan, Janna Shaw and Julia Shaw, along with Avery Wolfe.

Hernando coach Nicki Whitten said the five have been great role models for her younger players on and off the field.

“They’ve been a part of our program since the seventh grade,” Whitten said. “They’ve really set the tone for what we want the rest of our athletes to look like. They’ve been great players and great people.”

On their way to the program’s first-ever state title last spring, the Lady Tigers were 35-3, with the only losses being an early-season defeat by Brandon, followed by losses to Lewisburg and Oak Grove (Hattiesburg), both in the state playoffs. Each time, Hernando would recover to take the best-of-three series and move on, winning the second-round playoff series in three games against Lewisburg and taking the state championship in three games against Oak Grove.

“We’re hoping to have a great senior season from all five again,” Whitten said.

Eyster was recruited by McNeese State and coach James Landreneau. The Southland Conference NCAA Division I school in Lake Charles, Louisiana finished 35-26 last season and made the NCAA Regionals at Baton Rouge, Louisiana.

Callahan is one of six signees for Central Arkansas, an NCAA Division I ASUN Conference member, with coach Jenny Parsons taking over the program last June. She replaced David Kuhn, the winningest coach in UCA softball history, who returned to his home state of Mississippi to coach at Mississippi Gulf Coast Community College.

Last year, the Bears to a 37-19 overall mark and a 21-6 conference record and a second-place finish.

Wolfe and Julia Shaw head to Itawamba Community College, which last season won the Mississippi Association of Community College Conference (MACCC) regular season championship for head coach Andy Kirk. The Indians finished with a 25-3 conference record, were 36-9 overall, and were ranked in the NJCAA polls as high as second in the nation at one time.

Janna Shaw will join a Northeast Mississippi Community College team under coach Jody Long that last spring finished with a 23-19 overall mark and an appearance at the MACCC conference tournament.