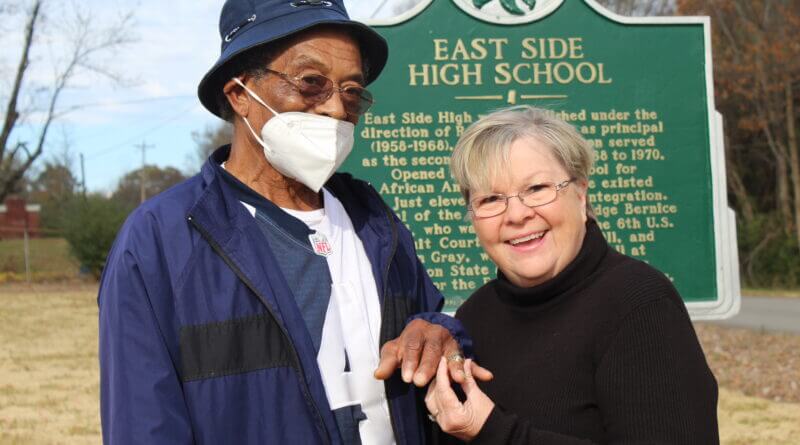 Photo: Jackie Davidson presents Nathaniel Woods his missing class ring in front of the historical marker for the school. The building is still there and is now known as Olive Branch Intermediate School. (Bob Bakken/DeSoto County News)

A reunion 53 years in the making took place Wednesday in front of Olive Branch Intermediate School, reuniting a man with a part of his life he has not had for more than a half-century.

In case you don’t know, what is now Olive Branch Intermediate began as East Side High, the home of the Dragons and the learning center for the African-American students of the city during the days of segregation.

From 1958-1970, Black students attended class at East Side until all high school students regardless of race were brought together to what is now Olive Branch High School.

A proud alumnus of East Side High was one Nathaniel Woods, who gained his diploma 53 years ago, but lost something treasured and valuable in the process.

“When I finished school, I didn’t have my ring, but now I have it, and it’s mine,” Woods said.

The Olive Branch resident had lost his class ring and left his school days behind without the possession, not knowing where it went to.

Where it went was into the possession of one Cecil Mayo. No one really knows how Mayo found the ring, with possible speculation being that he found it while at a Capleville Saddle Club barn, or on a Memphis Area Transit Authority (MATA) bus that he drove.

Mayo’s daughter Jackie Mayo Davidson, now of Eads, Tennessee, said her father passed away about 18 years ago. It was in helping to clean her mother’s home that she stumbled on a black box that had an important remembrance inside.

“I saw the box, opened it up and I saw the class ring,” said Davidson. “I thought it was my dad’s ring. When I told my mom that I had found daddy’s class ring, she said it wasn’t his ring because he only went to school through the sixth grade.”

That started the search for the real owner that could rival any police investigation.

Davidson first joined an East Side High Facebook page in early October, on a day that happened to be her father’s birthday, and asked if anyone might know the owner of the missing class ring.

Davidson also connected with a couple of other Facebook pages, all without any success. The initial hang up was that she thought the initials inside the ring were M.N., which didn’t match any of the graduating students from that particular year.

On closer view with a stronger magnifying glass, it was discovered the initials were actually N.W., so Davidson went back to the East Side High Facebook pages and asked again. An assist this time was given by Beverly Jones, a person Davidson found on the Facebook page, who did some investigating of her own to find it was likely the ring that belonged to Nathaniel Woods.

Last Sunday, Woods and Davidson finally connected on a phone call, with Woods telling her he had not gotten to wear his class ring often and Davidson saying she thought the ring was in excellent shape. It is her belief that her father found the ring shortly after Woods lost it, and put it in the box, where it has been for all of these years.

Wednesday morning, they met at Dodge’s Store in Olive Branch and then went to the school site for the official presentation and photos.  DeSoto County News was allowed to come along to report on the event.

Davidson credits Jones for helping make the ring reunion possible.  “I am so thankful for her and her hard work in making this meeting happen,” she said. “We were able to get Mr. Woods his class ring back, a ring he never got to wear.”

“She’s an amazing woman, she’s one of a kind,” Woods replied. “She’s got a good heart, because most people would not have done it.”

Davidson is looking forward to continuing the connection a piece of found jewelry has now brought together.