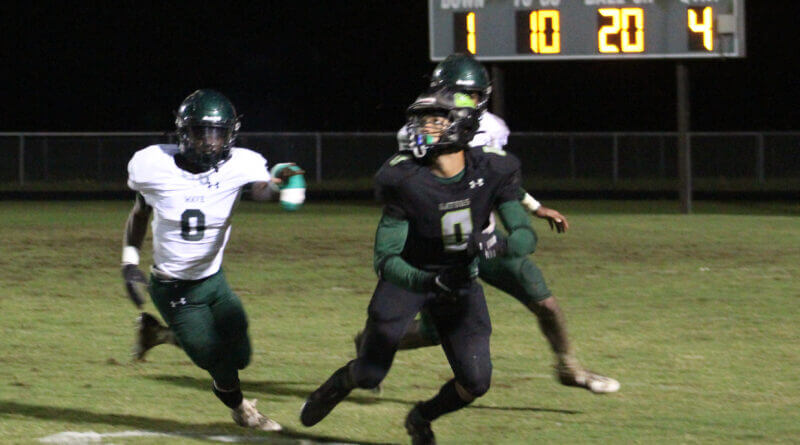 The West Point football Green Wave, one of the traditional MHSAA 5A powers, defeated the Lake Cormorant Gators in a Region 1-5A clash on a rain-soaked field at Lake Cormorant Friday night.

Running back Keshawn Henley scored three touchdowns and Cameron Young added a pair of touchdowns for the Green Wave (5-1/ 4-0) in the victory. Lake Cormorant (4-4/2-2) answered with scoring runs from Jordan Martin and quarterback Tevin Amos, who threw a touchdown pass to Kejuan Williams for the other score.

After waiting an extra half-hour to start the contest due to severe thunderstorm and tornado warnings in DeSoto County as a rain system went through, West Point took the early lead in the first quarter with a 34-yard run from Jaquontis Harris and a four-yard run from Young.

Henley added to the lead with nine minutes left in the first half a one-yard run for a 20-0 Green Wave lead.

But Lake Cormorant rallied with 14 unanswered points before the halftime break when Amos connected with Williams for the Gators’ first score with 6:19 remaining, and again just before halftime with Martin’s one-yard slant off the right side to make the intermission score 20-14 West Point.

“We finally started putting some drives together and catching some footballs,” Lake Cormorant coach Nick Nester said. “We were picking up some first downs and not stalling out like we did in the first quarter. We finally got it going and made some plays. When that number one (Amos) gets out of the pocket, he can make some things happen.”

But taking the football to start the second half, the Green Wave quickly reclaimed any momentum the Gators got with the second quarter scores. Young broke free up the middle for a 41-yard gallop to the end zone early in the third quarter, and Henley scored his second touchdown of the game on a three-yard run with 6:21 left in the quarter.

Henley and the Green Wave started to put the game away midway in the final quarter with a 97-yard blast for the touchdown, which came after Lake Cormorant was stopped on downs at the three-yard line on what looked to be a scoring drive.

Lake Cormorant would get one more on the board before the end of the game when Amos would score from 11 yards out, a score that came after a fumbled West Point set the Gators up at the Green Wave 15 yard line with 5:10 remaining.

“We had a lot of missed opportunities for us,” Nester said. “A great football team we knew we were getting. We just came short.”

West Point’s win was the Green Wave’s fifth straight after opening the season losing by a forfeit to Starkville. Lake Cormorant entered the game coming off a 36-14 win at Saltillo the week before.

But Nester was excited to see how his team would respond to the challenge of facing one of the state’s perennial 5A powers.

“This is who we want to play,” Nester said. “We know what that team (West Point) represents, so it’s a game we always look forward to and we respect them. Against them, we’re going to play hard.”

West Point also rebounded in the series after losing to Lake Cormorant last season, the only win for the Gators in what has been a dominant series for the Green Wave, winning 12 of 13 meetings all-time.

Next week, the Gators play at New Hope (Columbus) while the Green Wave are back on the road, traveling to region rival Greenville.