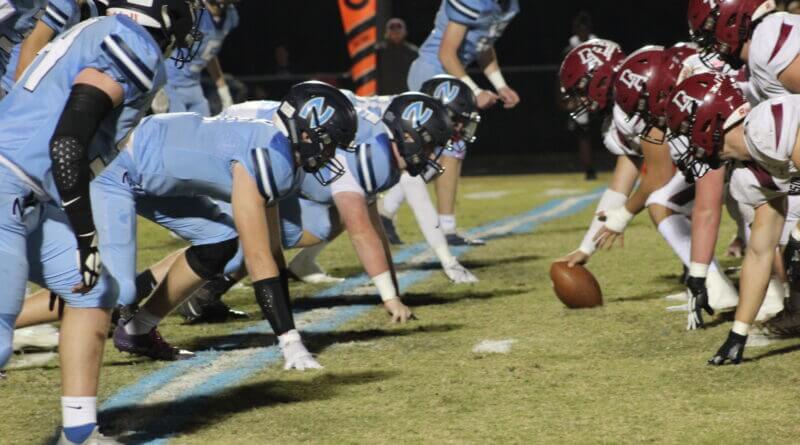 The football season ended Friday night for the Northpoint Christian School Trojans, as Davidson Academy of Nashville returned to Southaven and claimed a 29-14 TSSAA Division II-AA first round victory.

The Bears had defeated the Trojans in early October 49-20 in a regular season contest, but had to return to Northpoint for the first round of the Tennessee prep football playoffs. The Trojans earned the home game being the number two seed from the West Region.

Despite the victory, Davidson Academy (6-5) will return to the road next week, but this time will head to Knoxville to play Webb in the second round.  Northpoint ended the season with a 6-5 overall record.

A struggling offense plagued Northpoint in the first half, an indication of which came in the first quarter when the Trojans moved within field goal range. Sammy Rojcewicz’ 37-yard field goal attempt would have been good, except the left upright got in the way. The kick hit the upright and fell off no good to keep the game scoreless.

The Bears finally got their offense going in the second quarter, when senior Courtland Simmons broke through for a touchdown and a 6-0 lead after a seven-yard run.

Simmons later in the quarter found himself on the receiving end of a 70-yard touchdown pass play to give Davidson Academy a 12-0 advantage, still in the second quarter.

Northpoint gave up another major score shortly after that, when a high snap on a fourth-down punt attempt was recovered by the Bears’ Tyler Brown for a score and a 19-0 lead as the first half ended.

“That was the big swing against us and that’s a place where you can spiral out of control,” said Northpoint coach Tyler Gold. “They did some things defensively from the first time we played them and we struggled to get the ball moving.”

The Trojans gained some spark early in the third quarter, scoring their first touchdown of the game at the 10:12 mark on a 29-yard run by sophomore running back Damontae’ Dillard. The scoring play came on the initial drive of the second half for Northpoint and got them within 19-7.

“He’s a kid that actually fought through an injury this year and this was his first game playing,” Gold said. “His score brought a ‘believe attitude’ back on the sideline and it was important to go get those points.”

However, Davidson Academy would answer the Trojans’ touchdown with a third touchdown by Simmons, this one finishing a drive with an eight-yard score with 6:38 lead in the quarter. The play increased the Bears’ margin to 26-7 and they would later add a 34-yard field goal before the quarter’s end for a 29-7 Davidson Academy lead.

Some late spark emerged for Northpoint in the final minutes of the game, when sophomore Harrison Nowell caught a 36-yard Jack Patterson touchdown pass with just over three minutes remaining.

With the score now 29-14 Davidson Academy, the Trojans were able to recover the following kickoff, but couldn’t move the ball any further and the Bears were able to run the clock out.

“To the very end, to the last zeros, our guys fought, and that’s all you could ask for,” Gold said.