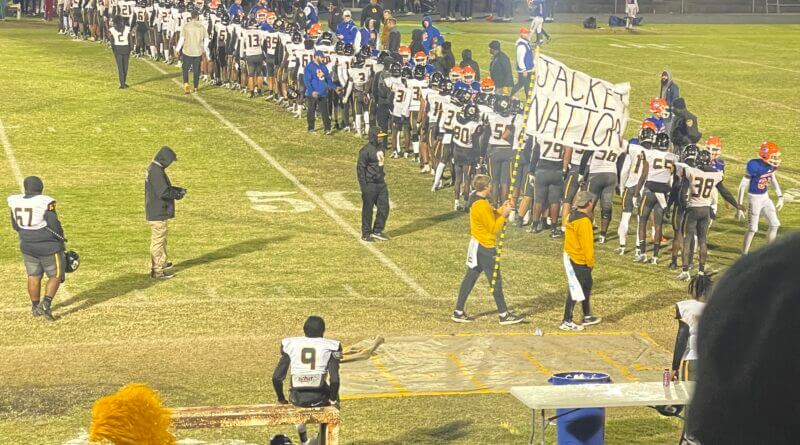 Southaven, DeSoto Central and Lewisburg all were turned aside in their attempt to advance into next Friday’s second round of the playoffs.

Likely the biggest crash of the evening came at Southaven, where the Southaven Chargers were manhandled by the Starkville Yellow Jackets by a 38-12 score.

Many thought Southaven, which entered the game with a perfect 10-0 record and champions of Region 1-6A, would move past the Jackets, which came with a 8-3 mark and was the number four seed from Region 2-6A.

During a turnover-marred first quarter, it was a Starkville turnover deep in Jacket territory that led to Charger quarterback Britton Stovall scoring the first touchdown of the night, a one-yard run with 3:35 left in the opening period for a 6-0 lead. The extra-point kick was blocked, however, and that would be a trend for both teams in the contest. Only two extra-point attempts were successful the entire night.

After Stovall scored, Starkville would answer late in the first half on a 23-yard pass play from quarterback Billy Petty III to Stonkka Burnside for a score and a tie game, 6-6 at halftime.

The second half completely belonged to the Yellow Jackets, especially the third quarter.

Petty crossed the goal line twice on runs of 13 and five yards, and running back Curtis Willis went over for scores from four and 44 yards as Starkville built a 31-6 lead after three quarters.

Petty went over from nine yards away with five minutes to go in the game for a 38-6 lead and Calvin Williams answered for Southaven with the final touchdown of the night, a five-yard run to make the final score 38-12.

As the game progressed and the Starkville lead grew, the chippiness between the squads also grew and eventually led to an apparent player ejection late in the contest.

The Chargers, despite a perfect regular season, saw their season end with a final record of 10-1. Starkville moves on in the playoffs with a 9-3 overall mark. The Yellow Jackets also are 19-4-0 in the all-time season series against Southaven and have won five straight. The Chargers’ last win against Starkville came in a 28-27 victory in 2010.

Starkville travels to Clinton on Friday, Nov. 18 for its second-round contest.

TUPELO 42, LEWISBURG 0: The Lewisburg Patriots were shut out from the Tupelo Golden Wave 42-0, the third-straight time Lewisburg has fallen to Tupelo in a game played on the Golden Wave’s blue turf. The last time Lewisburg (5-6) played in the playoffs was in 2012, when the Patriots defeated Cleveland 28-23, but then lost to Itawamba AHS 30-3.  Tupelo ground out 397 yards of total offense to the Patriots’ 77 yards. Lewisburg quarterback Gunnar Gilmore threw for 63 of that total with Lucas Gaschk catching two passes for 28 yards.

CLINTON 41, DESOTO CENTRAL 14: Two Andrew Moore touchdown passes were the offense DeSoto Central could muster in the loss to the Arrows, which mow hosts Starkville in the next round. One was a 21-yard pass to Ethan Minor and came after Clinton had taken a 27-0 lead. The second was a pass to Quentin Hannah late in the game that got the Jaguars within 34-14 Clinton. In its fifth post-season apperance in school history, DeSoto Central has yet to win a playoff contest, now 0-5.  The Jags lost in the first round last year to Madison Central 42-7.

MHSAA 6A North Half football playoffs – first round

MHSAA 6A North Half football playoffs – second round