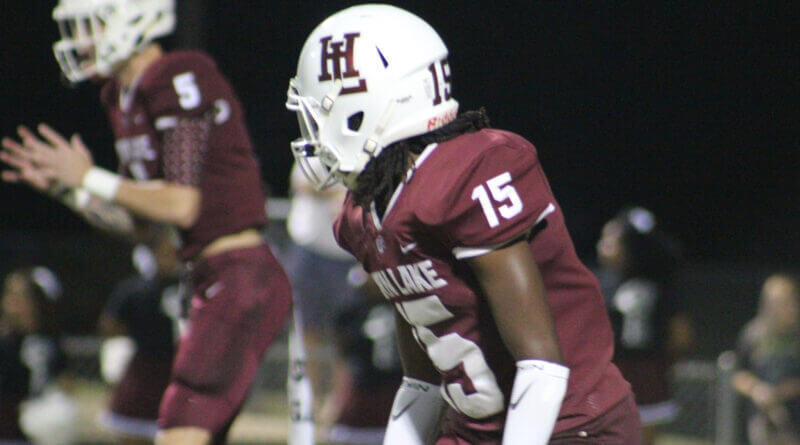 Friday’s game was Lewisburg coach Dustin Hectorne’s first game as head coach against the school he was defensive coordinator for, before taking the open Lewisburg position earlier this year.

The win for the Eagles was the fourth straight over the Patriots all time.

“It was a great start to district play,” said Horn Lake coach Mitchell Harville. “Being able to start off with a win is always a good and positive note. We had some guys step up and make plays tonight when they needed to make plays on both sides of the ball.”

Horn Lake took a 6-0 lead in the first quarter when senior wide receiver Erwin Reed caught a long pass in stride as he found a wide open secondary and ran the rest of the way on a 75-yard touchdown pass reception. The score came on Horn Lake’s first possession of the night after a Lewisburg punt.

Despite trailing after one quarter, Hectorne thought his team had played well.

“I thought we started really well, played a great first half with just little miscues here and there,” Hectorne said. “The second half, we continued to fight and they were a little too much for us in the second half.”

The Eagles broke the game open in the second quarter with three touchdowns, two of which were scored by Hopson, for a 28-7 halftime lead.

The Patriots appeared to be on their way to a tying touchdown in the first four minutes of the second quarter, but the drive stalled and a 27-yard field goal attempt was blocked by the Eagles with 7:12 left in the half.

Later in the quarter, Horn Lake worked a fake punt play on a fourth and eight call near midfield that had Hopson run the ball down to the Lewisburg 11 yard line.

From there, Hopson went over from one-yard out for a 13-0 lead after the extra point kick.

It quickly became 21-0 when on the first play from scrimmage for Lewisburg, Jamarion Bobo picked off a Gunner Gilmore pass and returned it all the way for the score, followed by Hopson scoring the two-point conversion with a run into the end zone and a 21-0 lead.

Lewisburg got what turned out to be its only score of the night in the final minute of the half, as Gilmore finished off a drive with a three-yard pass to Cole McKinney. The play with 58 seconds left before halftime momentarily got the Patriots within 21-7 after the extra point kick.

“It was great to get in the end zone and have some points to show for the work that we did do well in the first half,” Hectorne said.

Horn Lake was not satisfied, however, and took 43 seconds to add one more touchdown before the break when Hopson scored from two yards away and a 28-7 halftime lead.

A Mississippi State commit, Hopson scored twice more in the third quarter, from 39 and 46 yards away for the final result of 42-7 in favor of the Eagles.  He finished the night with 158 yards on the ground, part of a 342-yard offensive attack by Horn Lake.

“He (Hopson) is a really, really good football player and he has been for some time,” Harville said. “Since he’s been here, he’s been one of our best players. It’s always nice to have somebody like that on your side of the field.”

Condor threw for 79 yards on seven attempts, three completions and a touchdown.

With the win, Horn Lake evened its record to 2-2 while Lewisburg dropped to 1-3 with the loss.

Hectorne was greeted after the game by several members of the Horn Lake defensive team he coached the past several years before coming to Lewisburg. Hand shakes, smiles and hugs were shared as the Patriot players waited for Hectorne’s post-game talk to his team.

“It proves and says a lot about what we did here (at Horn Lake),” Hectorne said. “That meant everything in the world to see those guys.”

“A lot of what goes on here is a tribute to him (Hectorne),” Harville said. “He is a great man and I respect every bit of him.”

A recap of all season scores and upcoming schedules is found here.