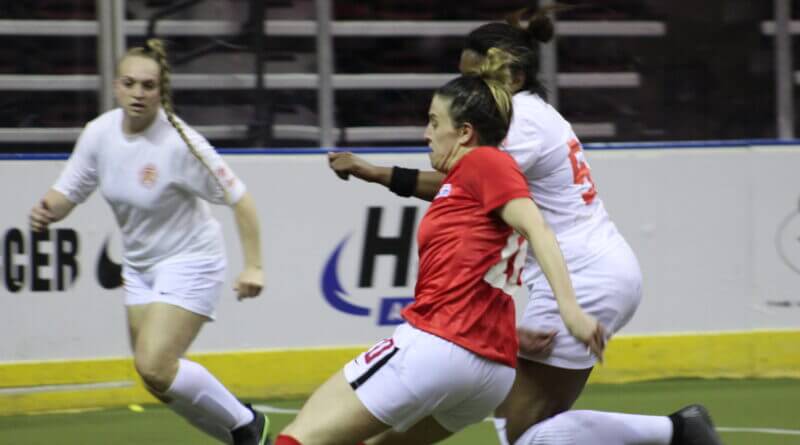 The Memphis Americans NISL indoor soccer team finished its home schedule Sunday afternoon with another pair of victories over the Rome Gladiators at the Landers Center in Southaven.

The Americans won the men’s match 9-8 for its third straight victory, fending off a fourth-quarter rally by the Gladiators, who scored two goals in the last 6:22 of the match to make it close.

Meanwhile, the women won their seventh straight match with another dominating performance, scoring the first seven goals of the game before Rome could answer in the fourth quarter of a 9-1 Memphis Americans win.

For the men, Mike Scharf was the Sunday star, as four of the Americans nine goals came off his boot, supported by another two goals each from Djordje Djordjevic and player/coach Corey Adamson.

The Americans women got a strong goalkeeping performance from Southaven product Angel Hailey and were led offensively by Bailey Tadlock, Sydney Walker, and Ashlynn Jones, each with two goals for the contest.

Memphis took a 4-2 in the first quarter, with Djordjevic scoring the first two Americans goals, followed by Scharf and Adamson. Rome answered with tallies from Felipe Villa and Kenny Taka.

The Gladiators closed within 6-5 at halftime when Chile Chipumbu, Oscar Huerta, and Cesar Terhuil got shots past Memphis goalkeeper Matthew Klinck. However, the Americans answered with Adamson and Scharf again finding the back of the net in the quarter, Adamson’s goal coming off a free kick.

“You know, he (Scharf) had three goals in the last game, “ Adamson said. “We’re just getting him into his comfort zone. He does all the right things off the ball and really all of the right things on the ball.”

Two more goals from Scharf, one coming on the power play, and a goal from forward Dan Rodman helped the Americans take a 9-6 lead after three quarters. Leonardo Stella scored Rome’s only goal in the third quarter.

The Gladiators’ late push in the fourth quarter came with Stella and Terhuil each scoring again, but it came late to complete the comeback.

For the game, Rome actually outshot the Americans by a sizable margin, 41-21, holding Memphis to only two shots in the entire fourth quarter of play.  Klinck made 23 saves in 31 shot attempts to earn the victory for the Americans. Miqui Perez took the loss for Rome with nine saves on 18 shot attempts.

Adamson, while happy for the victory, still saw several things to clean up as his team finishes the regular season.

“For us, a lot of mistakes, a lot of learning experiences for us,” Adamson said. “I don’t think we came in with the right mindset.”

The Memphis Americans continued their current win streak to seven games with Sunday’s easy victory over the Gladiators, 9-1.

After a scoreless first quarter, Memphis scored twice in the second quarter on goals from Stacy Murray-Owers and Sydney Walker for a 2-0 halftime lead.

Memphis would break the match wide open in the third quarter, with Bailey Tadlock scoring twice, along with Kelsey Keown and Ashlynn Jones finding the back of the net for a 6-0 advantage after three quarters of action.

Jones would add another goal in the opening seconds of the fourth quarter for a 7-0 lead before the league’s leading scorer Carlie Banks scored the Gladiators’ only goal of the night just a minute after Jones’ goal.

However, Walker scored her second of the match and Kristen Sparks put one between the legs of Rome keeper Megan Howren with just 35 seconds remaining for the final score.

Short of Banks’ fourth-quarter goal, Memphis keeper Angel Hailey was flawless in the penalty box, stopping eight of the nine Rome shot attempts. Howren was 12-of-21 at the goal line for the Gladiators.

Hailey has shown to be one of the top goalkeepers in the NISL and the former Southaven Lady Charger, Northwest Community College Lady Ranger and University of Montevallo Falcon is glad to keep her career going, here at home.

“I’ve been through so much and for me to be able to keep going, it’s all I’ve ever wanted,” Hailey said. “Finally all my family and all my friends are able to come see me and for me that’s a dream come true.”

Memphis finishes the regular season playing at Columbus, Ga. on Thursday and then Friday at Fayetteville, N.C., before all four teams converge on Fayetteville for the post-season tournament to determine the first NISL league champion.  Memphis is seeded second in the men’s side and is the top seed on the women’s side for the tournament.

HINTS OF EXPANSION NEXT SEASON: While nothing official has been announced, there were hints Sunday the league will continue next season, with talk that at least two new franchises will join the four-city league.

“It’s going to be an excellent build in the off-season,” Adamson said. “We’re expanding next year and we’re really excited. We’re going to be making some announcements and this (Memphis) is our flagship. This is the biggest market in the industry.”

Adamson said the team would be involved in summer camps and exhibitions to connect with the community more. The Americans had just a few months from the initial announcement of its existence before the season began.