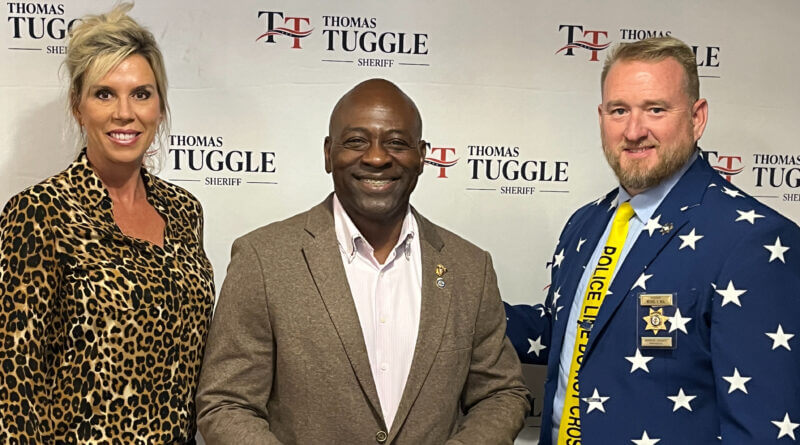 DeSoto County Sheriff candidate Thomas Tuggle is telling supporters his positions on some issues, speaking at a fundraiser dinner Thursday evening at the Gin at Nesbit.

Tuggle said he is going to be aggressive on crime, if elected, to keep all of DeSoto County safe. Tuggle also intimated that one school resource officer in DeSoto County schools may not be enough.

His message to supporters was simple, “Help is on the way.”

The candidate, a 30-year veteran of law enforcement who retired as Director of the Mississippi Law Enforcement Officers Training Academy to run for sheriff, is in a campaign with current DeSoto County Supervisor Michael Lee, who also has a law enforcement background. The election for the Republican nomination, and most likely the general election if there is no Democratic challenger, is in August 2023, still 11 months away.

Tuggle said he would make criminals feel uneasy if they try to operate in DeSoto County.

“If criminals want to seek or seek to develop an organization or enterprise, warning,” Tuggle said. “We plan to create a hostile work environment for you. We plan to be extremely visible and I plan to be decisive.”

Tuggle believes a unified law enforcement front between multiple agencies is important to put fear in the criminal element. He referred to the recent shooting spree in Memphis that now has 19-year-old Ezekiel Kelly in jail and facing murder charges. Kelly is accused of earlier this month shooting seven people, killing four, and livestreaming some of his attacks.

It is Tuggle’s belief that Kelly’s mistake was entering Southaven before he returned back into Memphis and was eventually captured, crediting the county’s strong stance on crime.

“Had he not crossed over into DeSoto County, I am confident they would have never caught him, but he made a mistake and came to Southaven,” Tuggle said. “I think he realized as he crossed the state line that something was burning in his body to get back across the border, and that’s what he did.”

On another issue, Tuggle said one school resource officer in each of the DeSoto County schools may not be enough. He’d like to see an officer assigned for each grade, third-through-ninth grade at each school. The officer would stay with a specific grade through ninth grade and then return back to third grade in a move to develop confidence in law enforcement and a better relationship with the students.

At the same time, Tuggle would like teachers to learn skills to deal with bullies and students with self-esteem issues. The former Marine said the Marine Corps Educators Workshop Program offered at Parris Island, South Carolina would benefit teachers and he’s been assured by the Marine Corps of about 12 spots for teachers who would like to attend.

“I plan to meet with every DeSoto County principal,” Tuggle said. “This would be at no cost to DeSoto County.”

Aggressiveness on crime has been a theme for both candidates. Lee has talked about eliminating early release for violent criminals in his social media post about the Ezekiel Kelly shooting spree. Lee called it an example of how soft-on-crime policies and weak leadership are encouraging lawlessness in the country.

“Early release must stop and coddling criminals must stop,” Lee wrote on his Facebook page.  “Criminals – know this:  Using our suburbs as a getaway or to commit criminal activity will not be tolerated in DeSoto County.”

Thursday’s dinner was Tuggle’s first move to provide more details on how he will campaign to win the position now held by Sheriff Bill Rasco, set to retire at the end of his current term.