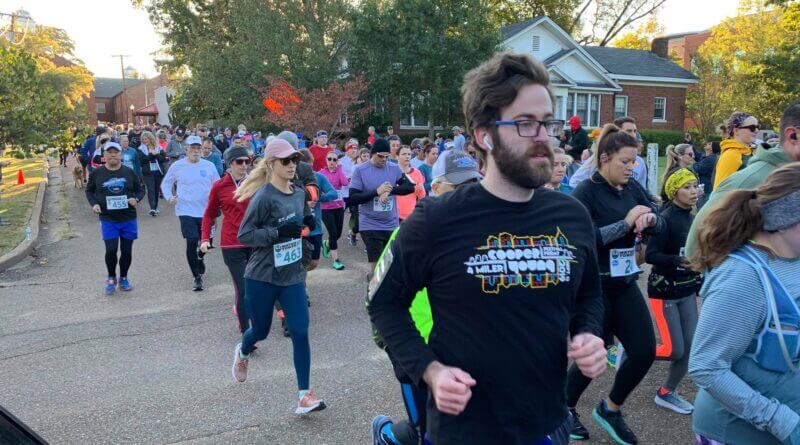 Photo: Runners head out from the start of the Hernando Water Tower 10K race in October 2021. (Bob Bakken/desotocountynews.com)

Runners are set to take off through the streets of Hernando Saturday in the 14th Water Tower 10K, presented by Hollywood Casino and First Jackpot Casino. City of Hernando Community Development Director Gia Matheny, who is in charge of the event, said about 350 runners had registered through Monday, but she expects more in the days ahead and even on Saturday.

“This last week we have quite a few runners to register before the race,” Matheny said. “Then, we have about 50-75 runners who register on the day of the race. We’re very excited about those numbers, because it is a nice tourism driver for the city and it also benefits our businesses.”

Last year saw just over 500 participants take part and Matheny said she would be happy to see anything close to that number, since last year’s run had a number of high school cross country runners take part. They are competing in a high school competition on Saturday, Matheny said.

“When I started with the city the race had been going on for a couple of years and there were about 130 runners,” said Matheny. “Last year, it grew to 502 runners. We’ll be good if we get back to the 500 mark again this year.”

That doesn’t mean the Water Tower 10K will be short on fun. In addition to the race, Matheny said the post-race activities will include the runners being fed with the help of Kroger and a new sponsor this year.

“The Hernando Farmers Market and Davis Meat Co. are providing Boston Butts so the Police Department is smoking them for us and they’ll have them ready for all of the runners and their guests on race day after the race,” she said.

In addition, the Craft Beer Station in Hernando and Clark Beverage Group are beer sponsors to provide beer to the runners after the race.

An after-race party sponsor is Community Bank of Hernando, where runners will be celebrating the completion of the grueling 10 kilometer (6.2 miles) run through the city streets, starting near the Courthouse Square. Each division will have awards for the top-three runners with pottery from popular Hernando Farmers Market vendor Wes Evans, who is making the awards by hand.

A new addition to the day will be a YART (as in Yard Art) Sale, presented outside the DeSoto Arts Council near the Farmers Market. Arts Council artisans will have items for sale that morning.

Most important is where the race proceeds will be headed. The Water Tower 10K supports the Hernando Excel By 5 Dolly Parton Imagination Library. The program provides free books for children to read in their initial years up to age five. The Hernando program offers the books to Hernando children and the race helps pay for the books’ purchase.

Here is a map of the course and those interested can click on this link to have the map become interactive: https://runsignup.com/Race/HernandoWaterTower10K/Page-8