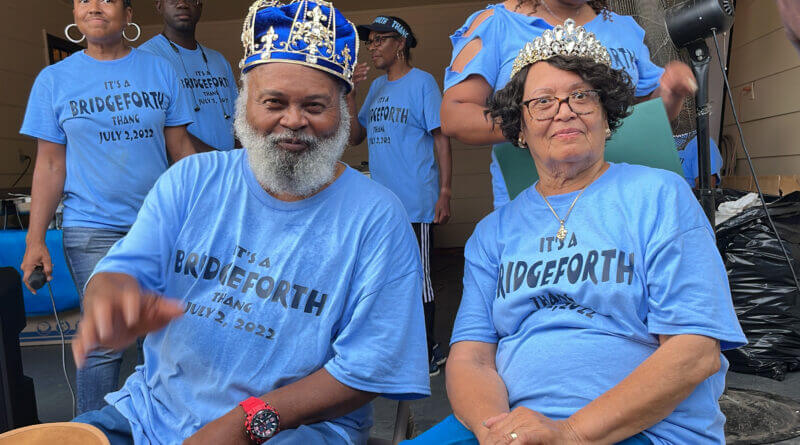 It was more than just your normal reunion on Saturday, July 2, when the Bridgeforth family gathered at the Southaven home of Ruth Bridgeforth Lester for a day of memories and renewing acquaintances. Family members came from all over and there was lots of food, bounce houses and more on the same grounds where brothers and sisters, including Ruth, were born and raised.

While Ruth was enjoying the family time with about 80 other relatives with Bridgeforth connections, little did she know the biggest surprise was waiting just for her.

At age 83, Ruth has had a profound influence on the upbringing of her eight brothers and sisters.  Later, in the midst of segregation, she and a partner would be a trailblazer in the Mid-South business world.

When Ruth was age 13, her mother died and Ruth assumed the role of family matriarch, helping her father raise the others.

“We kept it all together, my daddy kept us together,” Ruth said. “I’m 83 years old and I’m the oldest out of all of the children.”

Ruth had to leave school for two years to help out and made many sacrifices to help her father Gedie raise her siblings.

The sacrifices and challenges in her young life would be grooming Ruth for a role as a businesswoman. As an African American woman trying to start a business, Ruth and business partner Pearl Whitmore opened the first nail salon in Memphis.

“When we went to get a license, they didn’t know how to write it up because there wasn’t a manicurist in Memphis, so we were the first manicurist and salon that opened in Memphis,” Ruth said.

In 1972, they started “The Final Touch,” the city’s first nail salon that after 50 years still operates today on Poplar Avenue in Memphis.

It was that significant accomplishment that led to Saturday’s special surprise. In the program recognizing each branch of the family tree, Ruth was crowned as the family matriarch and brother Mack Bridgeforth, who came from his home outside Detroit, Michigan, was crowned as family patriarch.

But Ruth’s daughter Dianne and others said there was more in store for Ruth. Southaven Mayor Darren Musselwhite and Shelby County Mayor Lee Harris had taken note of Ruth’s perseverance and accomplishments by proclaiming July 2 as Ruth Bridgeforth Lester Day in their respective communities and those proclamations were given to Ruth. Rep. Trent Kelly also had a resolution on Ruth’s behalf read into the Congressional Record and that document was also given to her.

Musselwhite’s proclamation on behalf of the city noted that Ruth’s “vision and early experiences serving and honoring others prepared her for life as a woman of color.” Harris, for Shelby County, noted that Ruth “concentrated on being grateful, compassionate, and loving intensely.” Kelly told his fellow representatives on Capitol Hill that, “her past experiences emphasized vision, commitment, and a capacity to serve and honor others.”

The reunion didn’t end with that surprise, however. With an escort, the Bridgeforths and their kin piled into cars and traveled up into Memphis to see billboards that proclaimed the legacy of Ruth Bridgeforth Lester, brothers and sisters.

Saturday was a great day celebrating family and recognizing a family matriarch and trailblazing businesswoman. But, after all, like the shirts everyone wore proclaimed, “It’s a Bridgeforth Thang!”