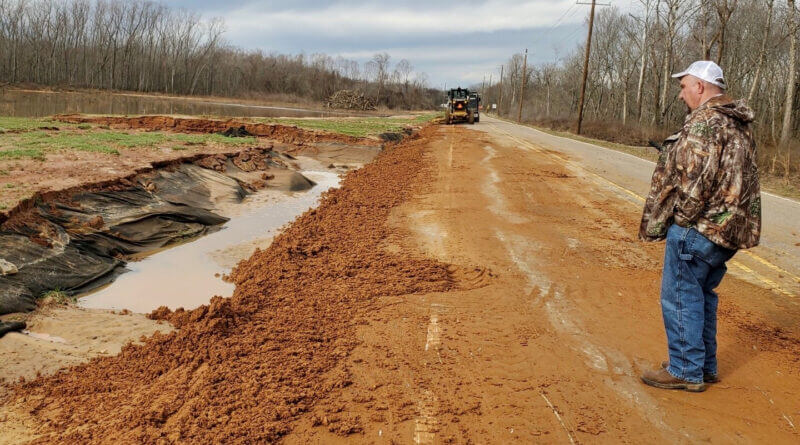 Photo: A 2021 view of some of the damage caused from weekend rainfall along Holly Springs Road during construction. (Bob Bakken/desotocountynews.com)

It’s been a couple of years in the making, but drivers will be able to start using Holly Springs Road in its entirety again this week.

A ribbon-cutting event to officially reopen the road will be held near the Johnson Road intersection at 11 a.m.  Among those expected to be on hand are U.S. Sen. Cindy Hyde-Smith and Northern District Transportation Commissioner John Caldwell, in addition to DeSoto County Supervisors.

The actual opening of the road will come after striping and final completion work has been done, which may mean a delay in the official opening until possibly Tuesday.

Holly Springs Road has been raised and rebuilt because of constant flooding issues after rainfall that have occurred over a number of years.

In the last phase of the project, the road was closed to traffic in July between Johnson Road and Smith Road, resulting in lengthy detours.

The project first began in 2020 on the 2.6 miles of roadway where flooding has been a problem. Five bridges were built and sections of the road were elevated 10 feet before the closure in July to finish construction.  A number of dangerous curves were also straightened.

The project cost was worth $37 million.