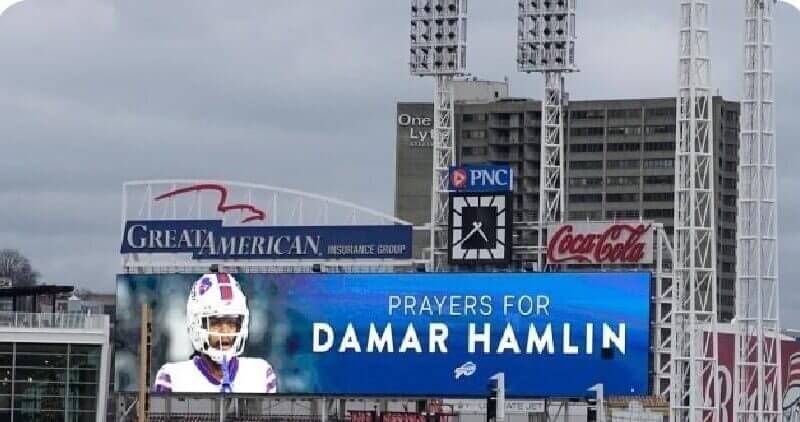 You may be following the story of Buffalo Bills safety Damar Hamlin, who collapsed in an apparent cardiac arrest while on the field during a game with the Cincinnati Bengals. Hamlin fell to the ground at the end of a routine play during a Monday Night Football game broadcast nationally.

Just days after the incident, Hamlin was able to FaceTime his teammates from his hospital room after doctors had removed his breathing tube; another sign his recovery was continuing to move forward.

Sunday, Hamlin watched his Bills defeat the New England Patriots while the team and the league held special moments at their games to support Hamlin and first responders.

Doctors say Hamlin has a ways left in his recovery, but told him a few days after the cardiac arrest that he had “won the game of life.”

The doctors say his recovery has been “remarkable” and the Bills’ safety expects to leave the hospital in the next few days.

Bills coach Sean McDermott has credited assistant athletic trainer Danny Kellington with saving Hamlin’s life for quickly arriving at his side and administering CPR. The statement acknowledges the importance of having an athletic trainer on site for sporting events, from the professional ranks on down to local high school and middle school contests.

Most athletic events in DeSoto County have at least one athletic trainer at a game site. For instance, Christopher “Chris” Smith is the athletic trainer through OrthoSouth for Hernando High School. You’ll see him along the sidelines or near the bench during many Hernando Tigers games in case an injury happens.

Smith said he and the school are trained and ready in case injury occurs on the playing field or court. All coaches in the state are required to be trained in CPR, Smith said, adding Hernando is a school that has written policies for potential emergencies to help plan for and expedite care. The school is a National Athletic Trainers Association SAFE School for that reason.

Smith, who has interned in the NFL, said Kellington was among several medical personnel who regularly staff an NFL game.

“In an NFL game, there’s anywhere in the neighborhood of 30 people there,” Smith said.

The first trainer to the scene will either signal or alert others about the issue to start a predetermined plan to respond to the injury.

Smith said the medical support group with a team or college program practices situations at least once a year before the season starts to prepare them for similar situations.

“The doctors and EMS crew will rehearse it and rehearse it for a couple of hours a day,” Smith noted. “You’ll want that response to happen to a certain extent in under two minutes. That’s the threshold. Faster than that is preferred. It’s all about speed but also safe execution.”

From head injuries, neck concerns to fractures or even ruptured spleens, athletic trainers are ready to face many situations at all levels.

On football night, there will be at least one athletic trainer and sometimes a medical doctor at most every contest.  The trainers for different teams communicate with each other and alert each other about what’s available if something happens.  And if there’s only one trainer at a contest and an injury happens to a player from the other team, the trainer is obligated to assist the player as if it was someone from his or her team.

The county schools are fortunate for the coverage they get from the different clinics that offer training services, compared to other areas of the state, where one trainer, such as in the Delta, is called on to cover as many of 30 different schools.