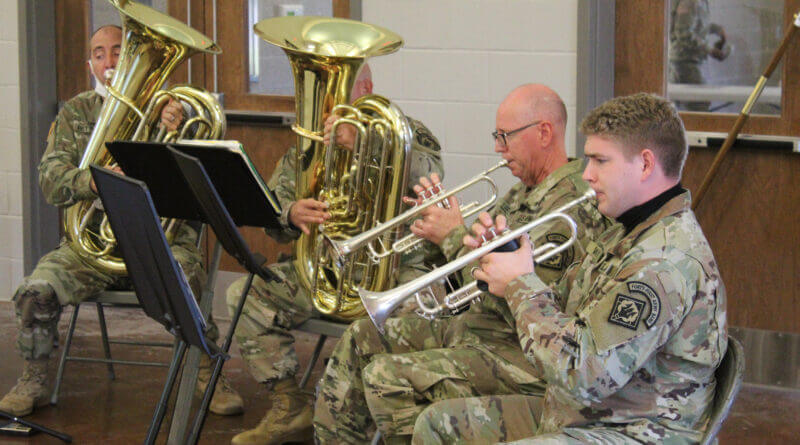 Photo: The 41st Army Band performs inside the Southaven Community Safe Room, where the state health department has been vaccinating for COVID-19. (Bob Bakken/DeSoto County News)

There are just a few days remaining before the coronavirus vaccination distributions from the Mississippi State Department of Health (MSDH) end in DeSoto County.

The distributions, which began earlier this year by a drive-through means at the Landers Center in Southaven, were recently moved to the Community Safe Room near the Arena in Southaven.

But officials said July 12 is the final day for the clinic to provide COVID-19 vaccines from MSDH at that location.

Since the Health Department started to give out the vaccine, 184,000 shots have been done at the Southaven locations.

The shot clinics have been the mission of the Army National Guard, assigned to check people in, give the injections, and check everyone afterward before they are allowed to leave.

With their mission soon ending, the Guardsmen on duty received a “note,” actually several notes, of gratitude in a musical way, during a Monday morning concert.

Members of the 41st Army Band of Jackson, Mississippi, in the middle of annual training at Millington, Tennessee, made their first DeSoto County appearance of the week Monday morning at the vaccination site.  The band, made up of fellow Guardsmen, played during the first three hours of the vaccinations inside the Community Safe Room.

The 41st Army Band consistently makes several appearances to play and promote the National Guard around the region.  This week, the band will also play at Independence Day fireworks celebrations in Olive Branch on Friday, July 2, and again Saturday, July 3 in Horn Lake. The band will also play for an hour at the Hernando Farmers Market in front of the County Courthouse building.

But Monday, providing support for their fellow Guardsmen on duty in Southaven was the mission of the 41st Army Band, said band member Staff Sgt. Joe Raymond, who is a Wayne County High School Director of Bands when not serving in the Guard.

“We were welcomed here by the NCO’s and the officers,” Raymond said. “They are well-operated, well planned and we’re just happy to be providing some musical support to them.”

As part-time soldiers, as National Guard members are referred to sometimes, the 41st Army Band doesn’t get to play or rehearse every day, so the musical organization savors every chance they can get to play.

“We rehearse on a pretty regular schedule, a few times a month,” Raymond said. “This time, we’re in the middle of annual training together for two full weeks. We’re National Guard units so we’re not rehearsing together every day throughout the year.”

“One of the missions of the Army Band as a whole is to provide musical support and encouragement wherever we can for our service members who are out doing their jobs and doing the intent of their commanders of the government,” Raymond said.

Monday’s concert attracted DeSoto County Supervisor President Mark Gardner, himself a trumpeter, who said the Guard and MSDH have done a phenomenal job vaccinating as many people as they have.

“We’ve received nothing but praises from our constituents about how efficiently they ran the program and have run the program,” Gardner said. “Without them, I’m not sure how we could have vaccinated thousands of DeSoto Countians.”